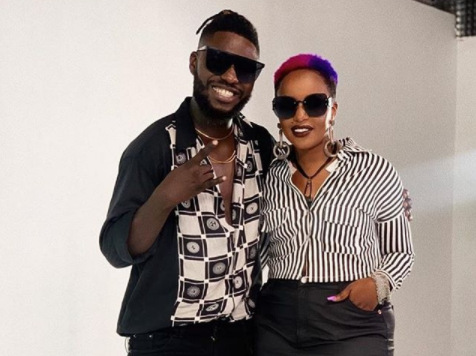 ‘You’ is a love song where Pascal expresses his feelings to a lady who’s swept him off his feet, and vows to focus solely on her.

Pascal’s vocals are on point and speak the language of love, with King Kaka making it even better with dope bars.

“I swear yetu ni Mungu alipanga, I see you katemperature huwa kananipanda… I found total happiness in your smile…You are the past, future, mummy we ni true… I’m blind today, my focus is you,” the song’s lyrics read in part.

The video is spectacular and features media personality Grace Ekirapa who plays the role of the vixen.

In the video, Pascal’s effort to win over Ekirapa is rewarded with a wedding between him and the lover of his life.

On YouTube, the video is doing really well with over 90,000 views in barely a day.

‘You’ is off Pascal Tokodi and King Kaka’s upcoming album. So far, the two have dropped three sons off the album namely; You, Nakulove and Fly.

Meanwhile, Pascal and Grace caused a buzz online after they shared a wedding photo, with many speculating that the two had tied the knot only for a new video to be released shortly afterwards.

The hype paid off as the song received numerous views shortly after premiering.