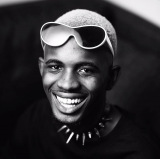 Black Sherif was born on January 9, 2002, in Konongo deep in Ghana’s Ashanti region. His parents named him Mohammed Ismail Sherif Kwaku Frimpong and he schooled at Kumasi Academy and later enrolled at the University of Professional Studies (UPSA). He grew up in a fairly solid family that had everything that describes a good life.

While growing up, he noticed how fortunate he was in life that he always had everything he wanted. It was not the same case for scores of other Ghanaians who struggled daily to school their kids and put three decent meals on the table. This triggered his artistic sense and discovered that music was a powerful medium to highlight the plight of his countrymen living in squalor. Blacko, as some fondly call him, remembers his childhood through his ambition to make a career out of music.

However, the fact that he is a Muslim gave him sleepless nights whenever he thought about music. He says that Islam to a certain degree perceives artists as sinners which discourage many of them from making a career out of music. He dodged music for a long time although he would feel the conviction in him but it wasn’t until he was 17 that he gave in and decided to focus on what makes him happy.

He realized hip hop-related so much to his agenda when he was in senior high school and he kept on flirting with this idea until 2019 when he broke out. He did Drill and a blend of rap/hip hop. Black Sherif quickly became popular due to his choice of videos. He chose downtown music videos showing the other side of life – how rugged, brutal and unforgiving it can be. All through, the 20-year-old drill artist wanted to burst into the limelight with so much intensity. He once described himself as a would-be musical beast and he made it.

Black Sherif started his music career in 2019 with ‘Money’ being among his first hits and he was pretty successful. Energized, he got down to business, and wrote mind-boggling music - one of the hits being ‘First Sermon’ which he followed up with ‘Second Sermon’. His 2021 release ‘Money’ set the ground for Black Sheriff, and he shot to stardom with ‘Second Sermon’ which he also released last year. So viral was this hit song for an artist who was only 19 years old when he did a remix of it featuring Grammy Award winner and Nigerian superstar Burna Boy. ‘Second Sermon’ remix came out recently and adds the flavor of the original song being a national anthem.

‘First Sermon’ and ‘Second Sermon’ earned the ‘Ankonam’ hitmaker musical fame that international producers couldn’t help but speak of him. Jae5, a British recording artist and producer who is well-known around the world, announced his desire to collaborate with Black Sherif. In addition, another renowned producer Ciza's adores the vicenarian, saying the songs in his catalogue deeply inspire him.

The Ghanaian artist reveals that his stage name has a great deal of significance because it is a symbol of a lofty African. His success in music is based on the fact that people can identify with it, which is why he features a poverty theme in his music. At the very least, for the purposes of his music videos, he chose to live on the streets in order to better comprehend the struggles that young people experience. Aside from the music, however, he's gone there to gain an understanding of what it's like to be homeless. Even with the fame, the young crooner says nothing in his life has changed except his confidence levels are now at an all-time high. He credits it all for the three music awards in his three-year music career.

Black Sherif Albums & EPs
He doesn’t have any but anticipates releasing one by the end of the year.

Black Sherif songs and albums are online on Mdundo.com and are available for download in MP3.