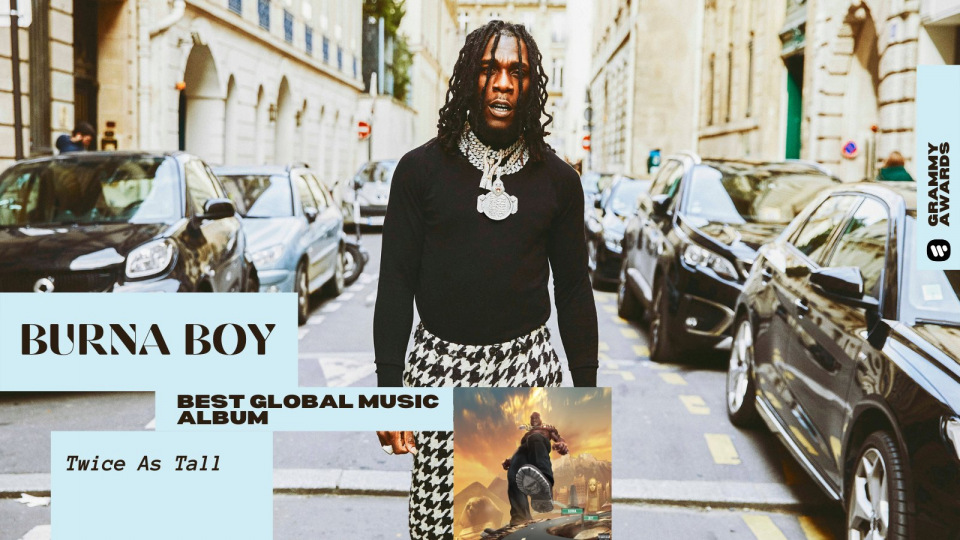 Burna Boy's 'Twice As Tall' album was on Sunday, March 14, 2021, named the winner of the Best Global Music Album category at the 63rd Grammy Awards ceremony.

The August 2020 released album beat four other projects nominated in the category to make Burna Boy a first Nigerian artist to win a Grammy Awards with an album.

Other album's that were battling for the Best Global Music Album category include Antibalas' 'FU Chronicles', 'Agora' by Bebel Gilberto, Anoushka Shankar's 'Love Letters' and 'Amadjar' by Tinariwen.

Burna Boy had in 2019 nominated for the Grammy Awards with the 'African Giant' album which failed to win.

The win gives the singer bragging rights over fellow artists in Nigeria whom they have been engaged in superiority battles for a while now.

'Twice as Tall' is the fifth studio album by Burna Boy which was released on August 14, 2020.

It was executively produced by the singer himself, his mother Bose Ogulu and American singer and songwriter P Diddy.

'Twice As Tall' album is a mixture of Afrobeats, Afrobeat, dancehall, pop and hip hop.

It was produced primarily by Telz, along with production from Rexxie, Timbaland and DJDS, among others and features guest appearances from Youssou N'Dour, Naughty by Nature, Sauti Sol, Chris Martin and Stormzy.

Aside from Burna Boy, another Nigerian singer Wizkid also bagged the Grammy Awards courtesy of a collaboration with Beyonce.

This is after the 'Brown Skin Girl' video won the Best Video category.