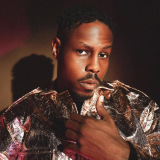 Real name, Ladipo Eso, Ladipoe is a Nigerian rapper, singer and songwriter from Lagos, southwest Nigeria. He is signed to Don Jazzy’s Mavin Records. He studied Biology & Chemistry at the University of North Carolina.

Ladipoe’s feature on Show Dem Camp’s 2013 record Feel Alright shot him to prominence and generally his affiliation with the rap duo did him a lot of good as both parties benefited from the frequent collaboration. At a time he was referred to as the unofficial member of the rap duo Show Dem Camp. His 2015 single “Adore Her” featuring Funbi gained him attention and in 2017, Ladipoe became the first rapper to be signed to Mavin Records. He released his first album, T.A.P (Talk About Poe) in 2018, a ten-track album that featured Sir Dauda, Efya, Tems, Seyi Shay, Funbi and Ghost of Show Dem Camp.

In April 2020, Poe scored his first number 1 single with his record Know You featuring Simi. The record went viral on social media and received massive airplay across media houses. He will double down on the success of Know You to release his second number 1 single just a year after, “Feeling” featuring BNXN formerly known as Buju. With the record, Ladipoe erased his name from the infamous list of artists that’d be referred to as one-hit wonder artists. It seems he’s now hacked the formula for making hit records and his next single Running which preceded his project Providence EP proved that right. The Mavin Records rapper has now successfully cracked the code and created a balance for making utterly insane rap songs and also viral/trending and radio hits as confirmed by his next record “Running” featuring Fireboy DML, a single which preceded his Providence EP.

Over time, Ladipoe has expanded his sound to not just rap but a more versatile style of music that will include a bigger Nigerian, African and global audience in general. The Nigerian rap scene is not as big as other genres and that’s why you’d see artists like him diversify their sound to cater for a larger audience. Afrobeats is the biggest Nigerian genre at the moment and artists are diversifying their sound for more audience and inclusivity. Only a few rappers have been able to do this successfully though and the Mavin Records rapper has surely joined the league of Nigerian rappers who have transitioned from making just rap music to making a more universal sound that would go on to become hit records and social media viral tunes. He is still able to dabble between sounds and release rap songs at intervals to appease age-long fans who started following him because of his rap. His song “Rap Messiah” is a record where he reminds fans of his rap abilities and hints that he’s not about to abandon his rap for strictly hit-worthy and Afrobeats records.

All Ladipoe songs are online on Mdundo.com and available for download in mp3