Free Download: Top 10 Most Downloaded Songs On Mdundo For March 2022 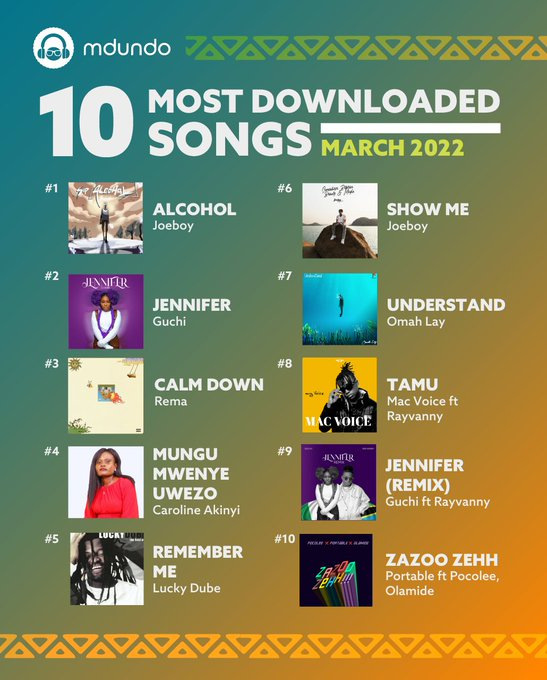 Another month in 2022 and Joeboy's Alcohol still holds the top spot on the download charts. His runaway hit, Alcohol, is still the favourite among Mdundo users plus his other song, Show Me, appears in the top 10. In addition to the two songs in the top 10 Joeboy also has eight other songs in the top 100 which gives him a significant share of downloads on the platform.

Guchi continues to have a presence in the top 10 with her hit song Jennifer and the remix being heavily downloaded. She also has multiple songs in the top 100 including hits such as Hello and Benzema. The top 10 in March has seen new entries in the top 10 with Guchi's Jennifer Remix and Portable's Zazoo Zehh appearing at number 9 and 10 respectively. Meanwhile, Rema's Calm Down, a new entry in the top 10, has stormed up the charts to the third position in the top 10. The rest of the top 10 songs remain unchanged from last month with only a switch of position among the songs. Lucky Dube's Prisoner, Joeboy's Focus and Chike's Running falling out of the top 10. Other artists with songs in the top 100 include Rudeboy, Mercy Chinwo, KiDi, Odongo Swagg and Professor Jay. With more songs being released on a daily basis it will be interesting to see which songs make an appearance on the top 10 list in the coming months.