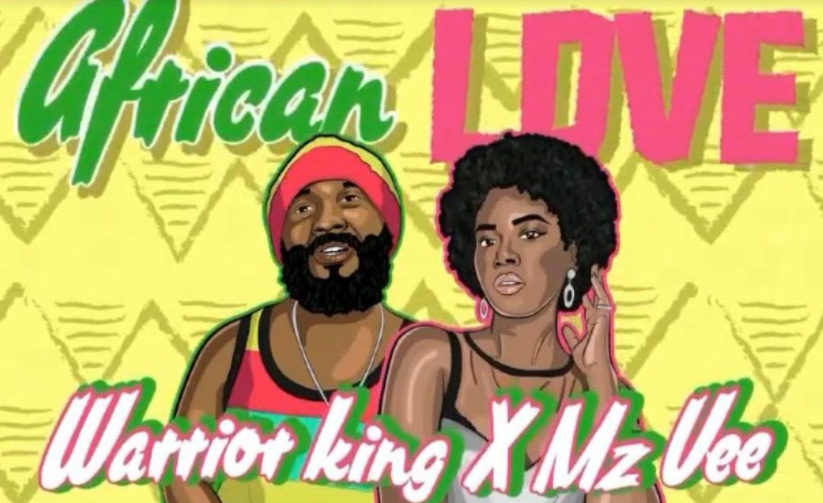 Ghanaian songstress MzVee has been featured on Jamaica's Warrior song titled 'Africa Love.' The afrobeat track produced by Jermaine 'Crawba Genius' Henry was infused with a Latin undertone that has made the song take on Warrior King's authentic reggae sound.

The new song that is set to be released on the digital platforms on April 9 has emulated the 1990s reggae hit single 'Hello Mama Africa' by Garnett Silk.
Due to the ongoing Covid-19 pandemic, the two sensational musicians, MzVee and Warrior King, recorded their vocals separately – in Ghana and Jamaica.

Warrior King, who is widely known for hit singles 'Virtuous Woman' (2001); 'Never Go Where Pagans Go' (2002); 'Hold Da Faith,' 'My Life,' 'Can't Get Me Down' (2005); and 'Wanna Give You Love' (2009), expressed that "It's a beautiful love song; an empowerment song." He went on, "I am feeling elated about this collaboration with MzVee. Working with feminine energy is always great."
MzVee, who is currently the only female Ghanaian on BBC 1xtra's Africa's 360 playlists,' said: "This song celebrates African love. He [Warrior King] praises the African woman, and he talks about how beautiful, how strong, and how courageous she is; and that's exactly who an African woman is. He is just a super good musician, and I loved his flow on this song. It was super, super, super dope."

She further noted that "Reggae and afrobeat, these are genres that came from the sweat and toil and blood and love… They are two genres that are actually part of my singing style," she affirmed. The new song 'Africa Love' also features other musical talents such as Almondo Douglas on guitar and Keneil DeLisser on drums.
According to the Jamaican singer, "Africa is where my heart is. So, this collaboration will make my presence be more felt in Africa… Afrobeat is like an offspring of reggae, and reggae is the same African culture. So, the message (is the same) no matter the genre.

Most Streamed Ghanaian Artists on Spotify

"For me, the message is what's most important at the end of the day," says Warrior King. "I have high hopes for the song; for it to resonate especially with people in Africa, the Caribbean – wherever African people are around the world and especially with the youths."