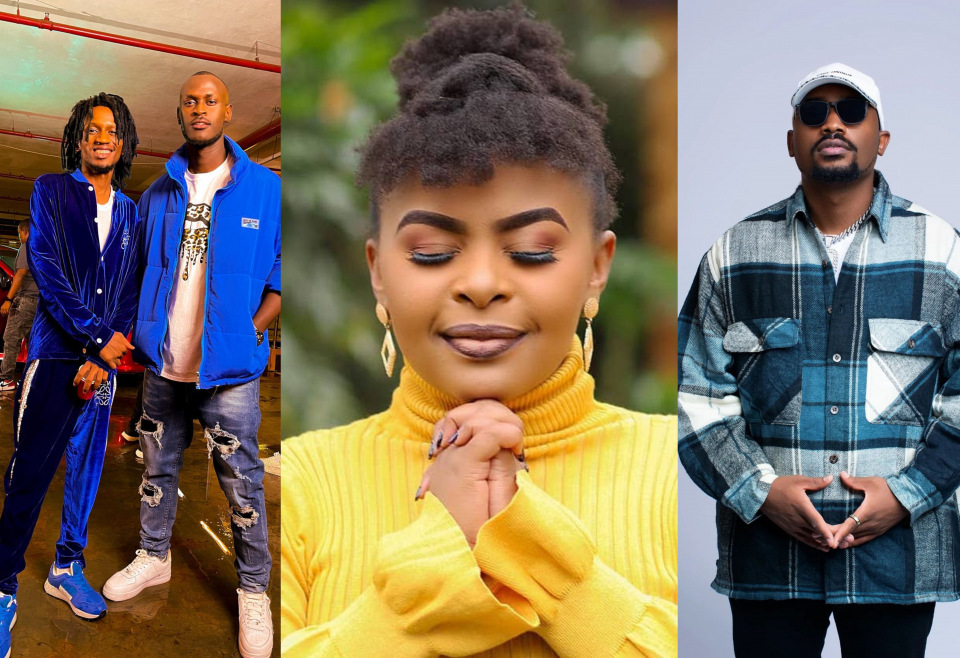 The success of a song is often measured by its ability to not only gain lot of views and streams on various online platforms, but also the duration that it dominates the trending charts. The past week has seen changes take place in the Kenyan music trending charts with some of the new releases climbing up the ladder to take top spots. Despite the increased competition, some of the songs have managed to maintain their positions. Here are the top trending songs in Kenya this week:

Sweet Love - Bahati ft Diana B
For the second week, Bahati's latest release 'Sweet Love' featuring his wife Diana B continues to take the lead on the trending songs in the country. The love song which was produced by Teddy B has gained more than one million views on YouTube. The couple expresses their love for each other through the well-written poetic lyrics. In 'Sweet Love', the two pour out their feelings in melodious voices.

Ka Unaweza - Maandy ft Mejja
Kenyan rap queen Maandy takes up the second position with her hit song 'Ka Unaweza' featuring sensational rapper Mejja. The chemistry between the two rappers is seamless making the song a masterpiece. Maandy takes the first part of the song with a slow conversation rap before Mejja joins her in the second half. The song has been treated to a warm reception among fans and is close to hitting half a million views.

Uncojingjong - Wanjapi 2 ft. Maandy, Breeder Lw, Lil Maina
Rising star Unco Jing Jong's 'Wanjapi' song featuring Maandy, Breeder LW, and Lil Maina continues to climb up the trending charts. The song has received a lot of hype from fans on various social media platforms, especially TikTok. It now ranks among the songs that you cannot miss at a party or club. Since its release, 'Wanjapi' has gained thousands of views on YouTube.

Maggie Wa Nyumbani - Ndovu Kuu ft Bien The Baldman
'Maggie Wa Nyumbani' from Ndovu Kuu in collaboration with Bien The Baldman is among the new songs that have entered the trending chart. The storyline of the song has touched the hearts of many. The song tells the story of two young lovers who have to run away in order to be with each other. The presentation of the narration by the two artists spices up the song even more.

Blueticks - Khaligraph 'OG' Jones ft Femi One
BET nominee star Khaligraph Jones is flying high with 'Blueticks' which he featured Femi One. This was one of the most anticipated collaborations in the music industry. Femi One had worked with the majority of the top rappers including Nyashinski, Mejja, King Kaka, and many others. The collaboration has had overwhelming support with the video of the song gaining thousands of views on YouTube.

Maliza Na Pombe Remix - King Kaka ft Iyanii, Layonn, Exray Taniua, Kuky, Ssaru, & Joefes
Veteran Kenyan rapper King Kaka continues to cement his comeback into the music industry with one hit after another. The rapper who had taken a break from music after falling sick is currently riding high with 'Maliza Na Pombe Remix' featuring Iyanii, Layonn, Exray Taniua, Kuky, Ssaru, & Joefes. Just like its original version, the remix of the club banger has gone viral and might even climb to the top of the charts.

Zawadi Yangu - Size 8 Reborn ft Peter Blessing
Celebrated Kenyan gospel singer and pastor Size 8 Reborn has made it to the trending charts thanks to her collaboration with rising star Peter Blessing on 'Zawadi Yangu'. This is a song that is dedicated to couples who want to celebrate each other. It expresses the pride and happiness of finding the right partner.

Haiwezi - Cartoon47 ft Stevo Simple Boy & Ntosh Gazi
Popular artist Cartoon47's latest Amapiano release 'Haiwezi' featuring Stevo Simple Boy and Ntosh Gazi entered the trending charts within 24-hours of its release. Apart from the cool amapiano vibes from he song, what has won the hearts of many is the simplicity of its videos. All the scenes in the video were shot in the slums of Kibera.