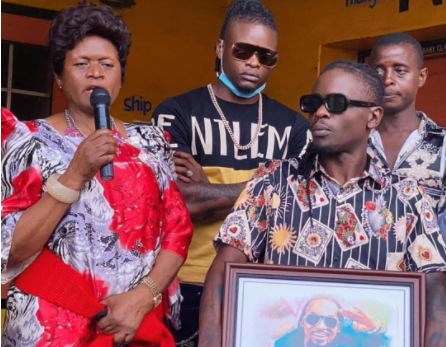 Popular Ugandan music family; The Mayanjas made up of Jose Chameleone, Pallaso and Weasel over the weekend brought together friends and family of the late AK47 and Radio Mowzey in a mass to celebrate their contribution to the Ugandan music industry.

The commemoration mass was held at St. Matia Mulumba Church and was attended by several musicians and stakeholders in the entertainment industry.

Speaking after the service, Jose Chameleone urged Ugandan artists to work hard and take the industry to the next level, as a tribute to the late AK47 and Radio Mowzey who were extremely talented.

On his part, Weasel noted that he still misses his late brother AK 47 and thanked those who’ve supported him through the tough times.

AK 47, real name Emmanuel Mayanja was a dancehall/kidandali artist whose career was just blossoming at the time of his death.

He broke into the music scene with his hit single 'Champion’, unfortunately, he died on 6th March 2015 under mysterious circumstances. His body was found lying unconsciously on the floor of Dejavu bathrooms.

He was rushed to Nsambya Hospital where he was pronounced dead five minutes after his arrival.