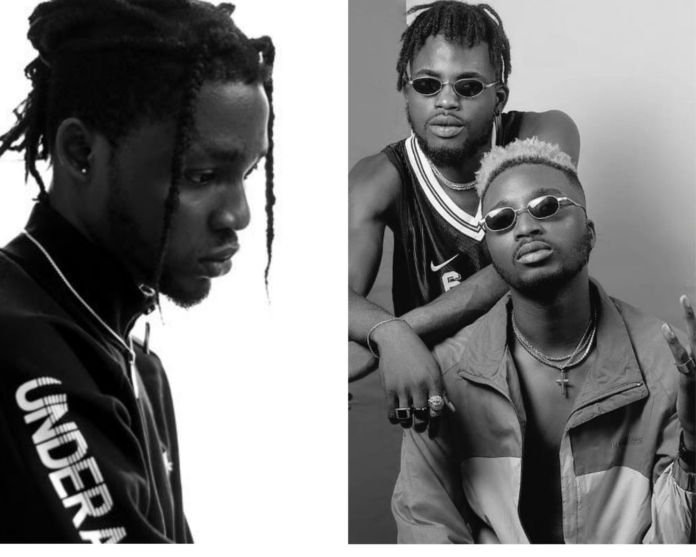 Two of the fast-rising Nigerian music stars - Ajebo Hustlers and Omah Lay will soon be releasing a song that they have collaborated together.

The two have seen their music fortunes turn for the better in the past year and teaming up for a song is likely to excite their fast-growing fan base.

News of the upcoming collabo was first shared on Twitter by Omah Lay who tweeted: "Ajebohustlers × Omah Lay."

A few minutes later, Ajebo Hustlers, a music duo replied to the tweet saying the song will not only be sweet but also for the culture.

"This one’s sweet music for the culture! #KposLifestyle," Ajebo Hustlers posted on their official Twitter handle.

Both Ajebo Hustlers and Omah Lay are from Port Harcourt.

Details of the collabo between the two remain scanty but it is just a matter of time before more information about the anticipated single come to light.

Ajebo Hustlers, a music group comprising of two talented singers, Isaiah Precious (aka Piego) and George Dandeson (aka Knowledge) met at a restaurant where they were working in Port Harcourt and after discovering they both share the same passion, decided to form a music group together.

The duo rose to gained more prominence with the hit single 'Bariwo' which they later teamed up with Davido for its remix.

Omah Lay, on the other hand, gained prominence with the hit single 'Bad Influence' off his debut EP 'Get Layd' which was ranked as the most-streamed EP released by a Nigerian singer in 2020.

More News: 5 Top Nigerian Projects of 2020 with No Featured Artists