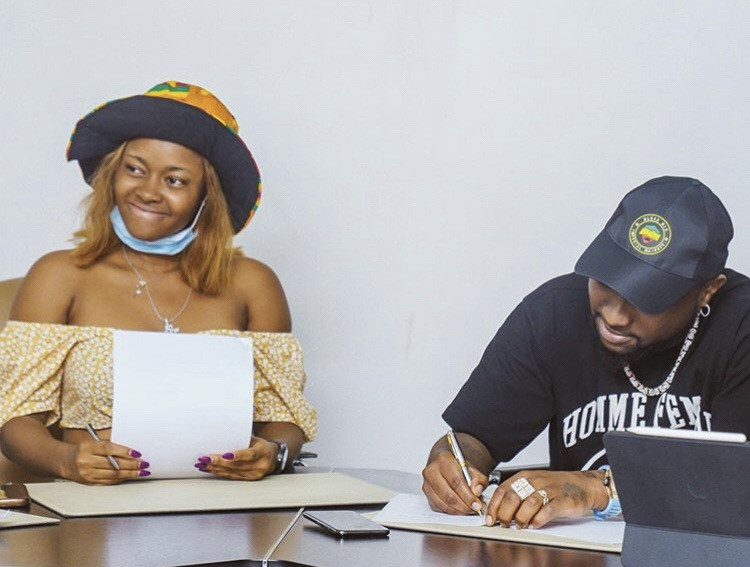 Davido Music Worldwide (DMW) first lady Liya has narrated events that led to her meeting superstar Davido, which ended in her being signed to the record label.

In a recent interview with Channels Television, Liya who was officially unveiled as DMW singer in October 2020 revealed that she met Davido during a listening party for Peruzzi, also singed to DMW.

She narrated how her manager, Vanessa, played one of her songs to Perruzi, who was impressed and linked them up with Davido, who also liked the song.

“It was an eventful day, I think it was on a Friday. I was out with Vanessa, my manager, going from one bar to another attending listening parties,” Liya said.

“From Peruzzi’s listening party, she (my manager) was like, ‘meet my artist. Can you (Peruzzi) listen to one of her songs?” she added.

Liya admits she was not as confident about the song her manager was to play, but luckily Peruzzi was impressed with the song and requested it be played one more time.

“Frome there while in a club, I was exhausted and behold infront of me was Davido who said ‘I hear you’re bad’ and I was like ‘I’m trying’. They played my song and he (Davido) said ‘you’re bad ooh, I want to sign you ooh. I was like I’m I dreaming,” Liya said adding that “it was like a dream.”

Liya, whose official name is Abdulsalam Suliyat Modasola is now the only female singer at the DMW that also has other star singers among them Mayorkun and Dremo.

The 21-year-old singer who has a vivacious personality and an amazing voice is currently preparing to release her debut EP. She had in December 2020 dropped her debut single as a DMW singer titled ‘Melo’ – an enchanting song that’s fresh, sweet and makes you want to dance.