The first lady is officially back, have a look at Nazizi's latest video 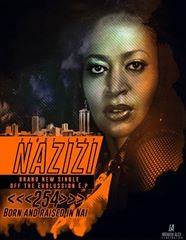 The first lady is officially back and my oh my are fans in for a treat; after taking a hiatus from the music scene for a while now, she is set to release her album Evo-lusion by the end of the year and as fans anticipate the release of the full album, she has released a new single off the album titled '254'

In the new track she steps out of her usual Dancehall sound and goes all Hip Hop rapping about the 254 and what makes it one of the greatest cities; it also exposes fans to an evolved Nazizi who sounds more mature and rejuvinated.

Produced by Young Wallace and Cream Vision, this is most certainly one must watch track and you can have a look for yourself and be the judge