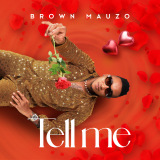 Who is Brown Mauzo?

Brown Mauzo started his musical journey in 2007. He started in a group known as Wawili Pekee but after the group disbanded he decided to go solo and went on to release different songs such as Subira which was Mauzo's debut single, released in 2012, and Natamani which was critically acclaimed in Kenya, released in 2013.

He was once signed to Kenya's most known music powerhouse "Ogopa Deejays" but later ditched the haven to start a record label known as "Mauzo Classic" which is a 12 people crew designed to mould and cater to his career.

His Swahili music taste has enabled the singer to collaborate with different Tanzanian artists such as Rich Mavoko, Bob Junior and Amini, and Ali Kiba in the song "Nitulize" which made his brand a household name in East Africa.

Which Are Brown Mauzo's Most Popular Songs:

Brown Mauzo has so far released only 1 album titled V The Album which contains 12 songs and is majorly dedicated to his now baby mama Vera Sidika- a Kenyan Businesswoman. The album has brought together several artists from East Africa including Ndovu Kuu, Mwasi, and Baraka The Prince from Tanzania.
Awards Won by Brown Mauzo.

At the 2015 Annual Nzumari Awards in Kenya, Brown Mauzo won the Category for Artist Of The Year from the coastal city of Mombasa.

From his output, Brown Mauzo sells himself as a self-made artist that is yet to be fully embraced in the East African region. In his personal life, Mauzo is said to have fathered two children one from his controversial past marriage and another with lover Vera Sidika- both girls.

How to listen and download Brown Mauzo music on Mdundo.com

His songs are available for free download and streaming on mdundo.com. To listen to his music on Mdundo, visit mdundo.com and search for Brown Mauzo. A catalogue of all the available MP3 music will then be provided for you to select the songs you want. You can download/listen to the latest music on Mdundo through your phone, laptop, or any other device that can access the internet.

Mdundo offers the latest MP3 music for free streaming and download. All you need is a feature phone and you can start listening to some of the best songs from your top artists. You can also enjoy DJ mixes specially curated to meet your needs. The songs are also easy to download and do not need a lot of data since they have been customized for users with feature phones. By using Mdundo, you help your favourite artiste grow while at the same time contributing to a platform that seeks to increase legal access to music in Africa. Stream/Download new MP3 songs online.