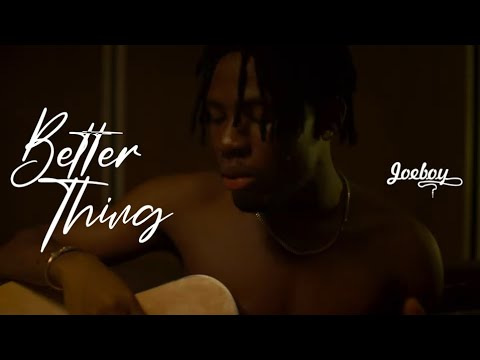 'Better Thing' is a song housed in Joeboy's debut studio album titled 'Somewhere Between Beauty and Magic'. The song is number 13 on the 14-track album also referred to as SBBM officially made available on February 5, 2021.

'Better Thing' video is a joy-filled one - starting with a group of kids trying to entertain a certain man - who seems not impressed. Joeboy is also seen singing shirtless, before the scenes transition to the singer in a dark-light room where he is joined by his crew all dressed up in white.

"Remember just the other day, nobody wan dey look my face. The Gbedu scatter the place, Na Baba God gimme the grace ooh. Na why I no dey complain when bad belle day..." read part of the song's lyrics.

'Better Thing' video premiered on July 30, 2021. It is a follow-up to 'Show Me' visuals released a few months ago - and which have already surpassed 3 million views on the American online video-sharing platform - YouTube.