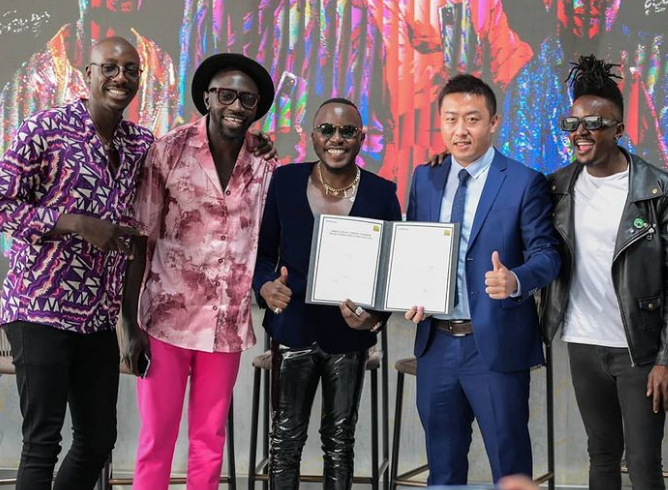 Taking to social media to announce them as the first official brand ambassadors, Infinix praised Sauti Sol’s role in empowering the young generation, dubbing them as an example of young people overcoming all the hurdles they face and creating their own destiny.

Read Also: Why Sauti Sol is Yet to Work with Diamond Platnumz – Bien Explains

“We are excited to introduce the new addition to the Infinix family and our first official brand ambassadors @sautisol. As a youth-centered brand we believe they are the very embodiment of why young people should make their own way through life regardless of the challenges they face along the way,” they wrote.

“We're stoked to be the newest addition to Infinix family and their first official brand ambassadors,” they captioned.

Meanwhile, this year has been an ultimate success so far, with the group bagging wins back to back. In January, Sauti Sol was named among the 21 artists to join the first YouTube Black Voices Class by YouTube Music.

In the same month, they also graced the coveted Times Square billboard as part of the YouTube Black Voices initiative. The New York Times Square Billboard appearance showcased visuals from their hit single ‘Suzanna’ which is the first single off their album ‘Midnight Train’.

In addition, they also released the video for ‘My Everything’ featuring India Arie, two months ago, which has been doing well and currently has over one million views on YouTube.