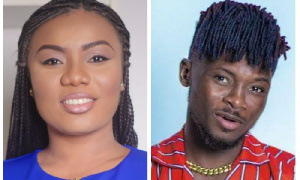 Ghanaian award-winning musician Eugene Kwame Marfo, popularly known by his stage name Kuami Eugene has been accused by Television personality Bridget Otoo of being ignorant and not showing any support to the ongoing #fixthecountry campaign on Twitter.
Kuami Eugene’s only comment on the going campaign for better living conditions was that people should take care of their mental health first before taking part in any campaign. In an interview, the 2020 VGMA artist of the year award winner advised Ghanaians to fix their mentality before rushing to call on the government to fix the country.

Sarkodie Explains Why Negative Criticism Does not Move Him

“My concern is the entertainment industry, every stakeholder from the content creator to the DJs and presenters; we should prioritize our creative pieces just like we do to other nationals." "On our music charts which are supposed to be a Ghanaian Chart, we see more of Nigerian music mostly topping these charts, and we need to fix our mentality towards our own people and what is produced here then after that is achieved, we can channel this energy to help fix our country." He said
In response to the Rock Star's comments, Bridget Otoo, one of the activists of the ongoing Twitter campaign, said, "The nerve of the ignorance."