Ladipoe Music To Fans: You’ll Be Tired Of The Phrase ‘New Music Dropping’

Mavin Records rapper Ladipoe has dropped a hint that he has lined up a number of new songs, all set to be released in the course of this year.

In a thread on his official Twitter handle, Ladipoe noted that he has so much to say this year – through music, and that his fans will be tired of the phrase ‘new music dropping’ from him.

The rapper had a fairly good 2020, releasing among others the hit single ‘Know You’ featuring Simi that won the Best Collaboration category at the 14th The Headies Awards.

He also teamed up with Joeboy on the song ‘Yoruba Samurai’.

Ladipoe in April dropped a first single for 2021 – a freestyle rap song titled ‘Rap Messiah’ which looks like it will be the first of the many songs he will be releasing this year.

“I tattooed “lifelines” on my body because that’s how much this path I’ve chosen, this music I make, this fanbase I’ve established, means to me. This year I have a lot to say. You’ll be tired of the phrase “new music dropping”,” read one of the tweets on the thread.

The rapper who signed a record deal with Mavin Records in 2017 further noted that music life is a hustle and that he is no longer bothered when people call him underrated as all he is focused on is raising the bar with every verse he drops.

“I used to be vexed when people called me underrated. But not anymore; they just want others to rate me as highly as they do. Like my guy martin told me, if you want disciples, you must carry the cross. I carry it and raise the bar with every verse I’ve ever dropped,” Ladipoe said in another tweet. 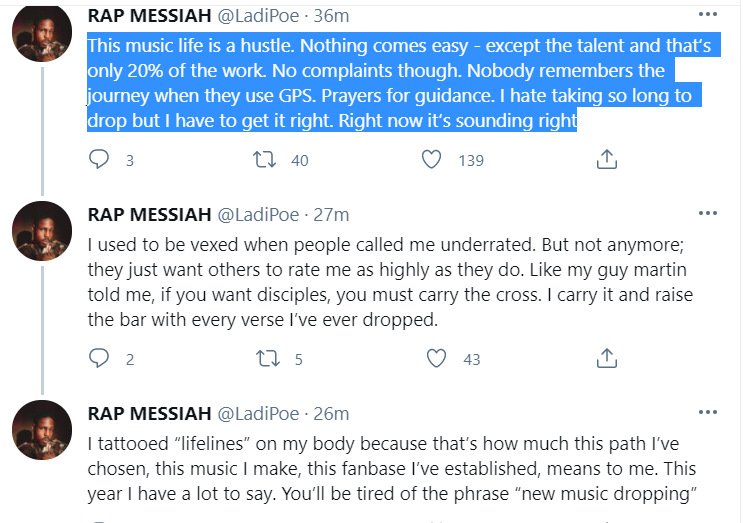 “This music life is a hustle. Nothing comes easy - except the talent and that’s only 20% of the work. No complaints though. Nobody remembers the journey when they use GPS. Prayers for guidance. I hate taking so long to drop but I have to get it right. Right now it’s sounding right,” he added.

Davido Reacts To The Reported Kidnap of Father Mbaka in Enugu

Officially known as Ladipo Eso, Ladipoe or Poe rose to prominence with the song ‘Feel Alright’ where he got featured by Show Dem Camp (SDC).

He was the first rapper to be signed to Mavin Records since it was re-branded in 2012 from Mo'Hits.