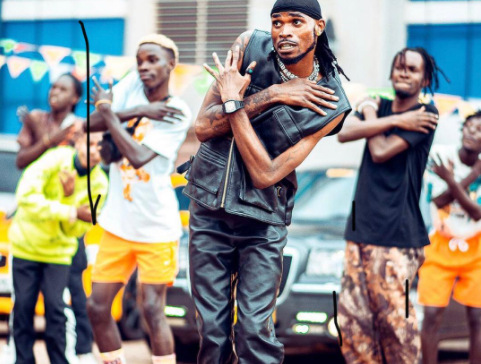 'Ombadala' is a call to dance. In the new release, the two artists express the joy they feel as they do what they shake their bodies to amazing tunes.

Read Also: Karole Kasita Pleads with Ugandan Gov’t to Allow Artists on Stage, Not Give Them Money

The self-styled dance murderers bring out the life in the song as they showcase their unique choreography.

This video is among the many Eddie Wizzy has done in a bid to cement his place as one of the best dancers in Uganda.

The video was shot in different places, but the most interesting scene is captured on the streets of Kampala. Eddie Wizzy and his three dancers appear in bathroom robes and towels as they pull off different dance moves.

They halt moving cars causing traffic as they dance in the middle of the road, attracting the attention of the passersby.

The audio was produced by D'Mario while the video was shot and directed by JP Mboira.

Eddie Wizzy started a unique trend of featuring top artists on songs as a dancer. He teamed up with Feffe Bussi on Dance Vs Rap, Tabuka ft. Nutty Neithan and has featured on a number of songs like Sheebah's By the Way, Nipe Yote, and ‘Be happy’, ‘Viva Africa’ , ‘Free Style Dance’, ‘Disco Disco’ by Eddy Kenzo among others.