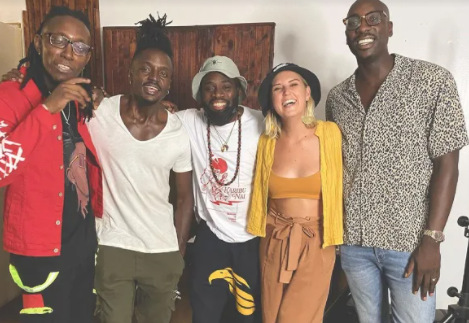 When Gemma Griffith first shared a photo of her with Kenya’s famed boy band Sauti Sol, there were speculations that a new song was in the offing. Much as fans from both sides speculated, Sauti Sol and Gemma did not confirm whether they were working on a new song.

However, Gemma has let the cat out of the bag and announced that she feels elated having worked with Sauti Sol.

Read Also: Sauti Sol Open Up on Thier Early Music Career and The Role of Bien’s Unfortunate Accident

In a recent post on Instagram, she said that “Making music with these boys was a dream… all my love x.”

Savara, one of Sauti Sol’s band members replied to her post saying: “You are indeed a gem.”

In February, Gemma who was on a tour to East Africa visited Kenya for weeks and interacted with some of the top musicians in the country. In one of her posts while at the Alchemist in Nairobi, Gemma was seen busy scribbling something down, lyrics perhaps, as Bien of Sauti Sol sat close by conversing with her.

“Writing face I always carry notebooks - I have dozens of them, full of lyrics, ideas and the occasional travel story. I’m also the girl with 12 pens in my handbag, so there’s one good reason to be my friend,” Gemma posted.