Ghanaian Artistes Who are Great Dancers 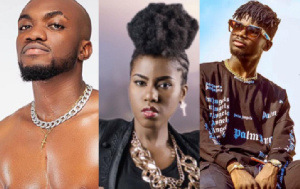 There are artistes in Ghana that we only know of their lyrical talent but the truth is that some of them are both good artistes and great dancers.
This has been seen in their music videos and also during their performance on stage. some of the artiste with both of these two talents include:

1. Mr. Drew
In recent times, Mr. Drew has proved beyond measure that he is not only good in releasing hit songs but also a great dancer with incredible dance moves. Most of the time he is captured as the lead dancer with solid dance moves and a rhythmic choreography with his team.

2. Kuami Eugene
he is mostly caught on social media effortlessly exhibiting some awesome dance moves while grooving to his songs mostly and also his epic dancing skills during stage performance.

3. Medikal
Despite Medikal being a great rapper, he also possesses some great dance moves which he brags on social media mostly dancing with his wife, Fella Makafui.

4. MzVee
He is also blessed with a dancing talent. This has been seen during her days at LYNX Entertainment, the singer is mostly captured social media dancing with Kuami Eugene. Her ‘Bend down ‘song is a good example where she is seen in a colorful choreography with the Rockstar