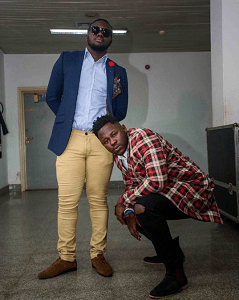 Ghanaian rapper and social media influencer, Showboy has made a new announcement from his prison confinement in the United States about his friend, Flow Delly of AMG Business fame describing him as a ‘man of black magic’

Showboy, who is the co-founder of AMG Business and CEO of 2Hype Gang has recommended Teephlow to stay far away from Medikal because his manager Flow Delly is nothing but evil.

According to Showboy, Medikal’s Manager Flow Delly loves black magic and he would make sure that he ties him from getting a hit song in the music industry.

He also mentioned that Strongman tried to cross with Medikal and since then, he is struggling to get a hit song. He tweeted:

Other News: GHANA: Teephlow eulogizes Kofi B in an emotional letter