Davido To Host a Live Concert Alongside DMW Signed Artists 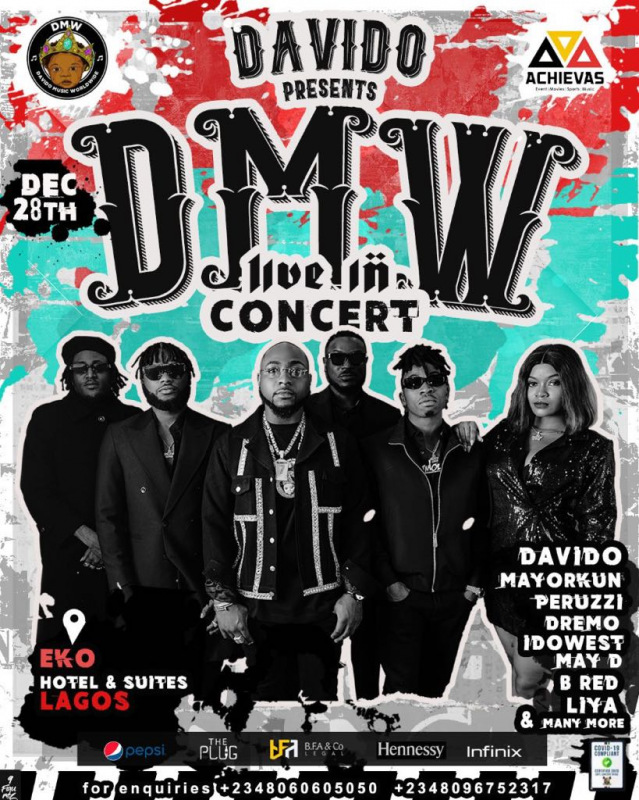 Multiple award-winning American-born Nigerian singer Davido will towards the end of December 2020 be hosting a live concert.

In a tweet, Davido revealed that the concert will feature all artists on his record label - Davido Music Worldwide.

Dubbed 'DMW Live In Concert', the event will offer a rare opportunity for fans as all the artists in the record label will be performing live.

The concert has been slated for December 28 at Eko Hotel.

"You know we’ve been wanting to do this for a long time but many reasons we’ve been unable to. Finally the time has come. Jungle don mature ! I present to you the hottest label in Africa DMW LIVE IN CONCERT! It’s gonna be a movie! See y’all on the 28th EKO HOTEL !!!" Davido posted on Twitter alongside a poster for the event.

According to the poster, among those that will be performing at the live concert include the label boss, Davido, Afropop star Mayorkun, rapper Dremo, Idowest, May D, B-Red, Peruzzi and DMW first lady Liya.

Many of the DMW artists have had an amazing year, with Davido capping it up with an album 'A Better Time' that had already gotten a number of nominations.

Dremo dropped an Album - Codename Vol 2 earlier this year same to B-Red who released 'Jordan' album in the second half of 2020.

Another DMW singer Peruzzi is preparing to officially released his album 'Rum and Boogie' expected before the year ends.