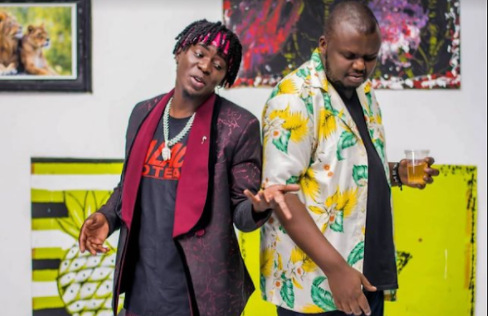 ‘Nye’ is directed towards a girl who is playing games with both of them. They tell her to relax because even their mothers don’t love her.

Willy Paul who has been in the headlines recently teased the song with a message to his dear fans and threw a jab at artists who he alleges buy views on YouTube.

True to his word, the banger which was released five hours ago, already has over 60,000 views on YouTube.

The visuals which contain sensual dance moves from the video vixen were directed by Ivan.

Meanwhile, Willy Paul re-uploaded his song ‘Collabo’ with a different instrumental. This comes after having a heated social media battle with the audio producer Ilogos who had previously produced the first version of ‘Collabo’.

Following the incident, Willy Paul issued a stern warning to anyone who would try to pull the song down as they had done to ‘Collabo’.

He also expressed that the incident had demotivated him on promoting the song further.

Mejja, on the other hand, is finishing this year in style with strategic collaborations. He is currently enjoying success from the hit song ‘Cheza Kama Wewe’ by Trio Mio, where he was featured alongside Exray and Nellythegoon.

The jam which was released two days ago already has over 155,000 views. In addition, six days ago, he was featured by Ssaru in ‘Leo’. The song which quickly became a fan favorite already has over 323,000 views on YouTube.