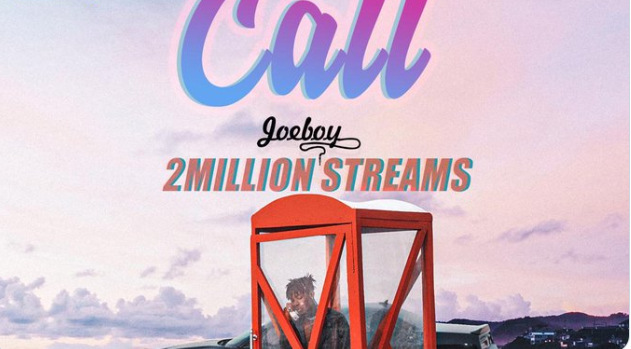 It is no doubt that talented Nigeria artist Joeboy will be a force to reckon with in the African music industry.

Since his entry into the industry about three years ago, Joeboy has been riding high, and fans love his style of music and confidence that comes with his voice.

Officially known as Joseph Akinfenwa Donus, Joeboy was discovered by another Nigerian singer Mr Eazi in 2017 after watching an Instagram of his cover Ed Sheeran’s ‘Shape of You’.

Now a week ago, the singer allied to emPawa, Mr Eazi’s foundation, dropped a new single hit dubbed ‘Call.’ A few hours later he followed up the audio with the release of the official visuals.

The song has been getting positive responses from fans and so far it has clocked 2 million streams across multiple platforms.

Just in case you didn’t know, streaming is listening to music or watching a video in real-time, instead of downloading it to your computer/laptop or phone and watching it later.

While celebrating the achievement, Joeboy, billed as one of the fast-rising Nigerian artists tweeted: “2 Million total streams on #Call so far! Grateful. Let’s keep streaming.”

emPawa also in a tweet said; “A week after releasing @joeboyofficial new single “CALL” the response has been amazing and well received by lovers of his music. Keep streaming and supporting the new sound of Africa.”

He tweeted: “Big thanks to Everyone Supporting The African Popstar @joeboyofficia new single!.”

The afrobeat hit “introduces a darker, more urgent edge to Joeboy’s sound while the video further positions him as a star to watch, as he shines in a dystopian, sci-fi love story set in an apocalyptic Lagos”.