5 Most Sought After Musicians in 2019 - Did Your Favourite Make The Cut? 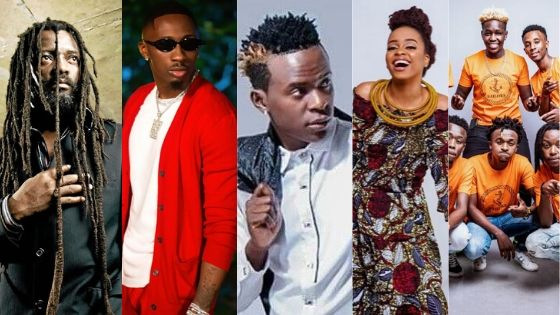 Mdundo is excited to publish a list of the Top 5 artists as 2019 comes to close. This year has seen the rise of new stars, legendary comebacks and extremely tight competition. Now, as much as gengetone is the biggest wave to have swept the country in almost a decade, ‘vitu kwa ground ni different.’

Based solely on downloads on Mdundo, these 5 artists hold the record for most consumed music as of December 2019.

Completely proving that indeed nobody can stop Reggae. South African Rastafarian Lucky Philip Dube was a hit sensation in the 90s and early 2000s. His music has lived beyond time even after his demise in 2007. The ‘I’m a Prisoner’ hit maker continues to rule airwaves even topping ranks, decades later.

‘The Love Album’ is this Tanzania based Afro-pop king’s latest creation. Juma Mussa as identified by his  government; has consistently served bangers and has bagged the best collaborations around East Arica. JUX made his debut on Coke Studio in 2019 and continues to release irresistible music.

Kenyan based Bongo Artist Wilson Abubakar Radido, is a multi-award winner and one of East Africa’s most sort after artists. Starting off as a gospel artist, in 2019 he effortlessly rebranded to secular but has continued to serve endless hits. Despite known to be quite controversial, Willy Paul is still Kenya’s top artist and was at rnk one on Mdundo for the better part of 2019.

Tanzania’s top female artist got her big break late 2018 and the zeal caught on in 2019. Faustina Charles Mfinaga broke the airwaves with her hit single ‘Ninogeshe.’ She has made impressive strides in her music career since; making her debut on Coke Studio and bagging a major collaboration with Kenya’s Sauti Sol on her latest release ‘Kiza Kinene.’

Gengetone has been too huge a hit to not make an impression. The all boy crew came to light in mid 2019 with their irresistible anthem ‘Wamlambez Wamnyonyez.’ A phrase so big it caught on as Kenyan greeting. The boys have influenced Kenyan culture so much that their music has created the current Kenyan slang vocabulary. They have also topped the Charts for 2 months straight wiping out Gengetone veteran group Ethic.