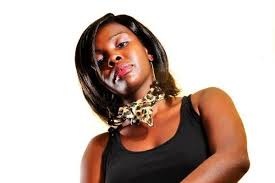 Female rapper and self proclaimed "Queen of Rap" Doreen Awinja popularly known as Pizo Dizzo has been nominated in the category of most downloaded female in the upcoming prestigious Mdundo Awards.

Some might ask why she chose the name "Pizo Dizzo" while others say she tries to emmulate the male rapper Octopizzo,which she gladly answers saying "Nilikuwa YGB kitambo na Octopizzo alikuwa anaitwa Baba Yao namimi Mama Yao. Hiyo time jina ilikuwa Lady P. So wakanishow nijiite tu Lady Pizzo then baadae ikakuwa Pizzo Dizzo." And uncontestably, she has shown why she wears the crown up to date.

This Grandpa Records gem has had the nation under mass hypnosis ever since her track "Chali Stinji", which is getting downloads by the minute. She started music in the year 2007 and has been staying faithfull to her grind ever since.

People might not know this,but Pizzo Dizzo is also passionate about acting and we all see this in her work, incoporating theatricals and drama skills especially in her recent video "Chali Stinji". She also loves emceeing events which i think blends well with her personality which she clearly expresses in music. We hope her all the best in her later projects and as for her nomination in the Mdundo Awards, I wouldn't be surprised if she won!