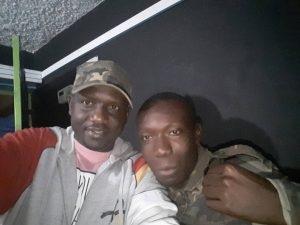 Former drug addict and street urchin Kobole is set to release his new song next week. The song which features Ghetto radio’s Majimaji talks about Kobole’s life on the streets, drugs and crime.

Ghetto Radio’s Majimaji literally picked up Kobole from the streets of Jua Kali in Embakasi village following an outcry from the women in the area. Kobole’s new song has been by Mashwanda of BMG Embakasi records, mix and mastered by Ray P under the sponsorship of Majimaji. “Women from Embakasi Village, Jua Kali area, came to me and asked me to save Kobole a youth with talent in music from drugs,” said Majimaji.

Kobole had to borrow clothes and shoes to meet Majimaji whom he appreciates for turning around his life. The production of Kobole’s song is one of Majimaji’s initiatives of developing talent in Embakasi area. Next in line is Daddy snake another street boy from Jua Kali set to produce his single.