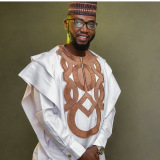 Rank: 501 ↘ -21
Ali jita is an international Nigerian Musician who sing mostly in hausa language and English, he is well know for his expertise in singing love and wedding songs, he is based in the northern part of Nigeria, kano to be precise. He is married with 5 kids, he was born in kano, grew up and schooled in lagos, he got inspired into music by listening to the then famous international musicians Westlife. He is now presently one of the biggest catch in the music industry. (more)
Promote artist ↑
report
Get Latest DJ Mixes
More Songs

Who is Ali Jita?

He is a celebrated Nigerian Hausa musician, singer and songwriter whose real name is Ali Isa Jibrin. He was born on July 15, 1983. He is one of the most popular Hausa singers in the country. Apart from singing, he is also an actor and has featured in various Nollywood films especially from the Hausa section.

Ali Jita Journey and Breakthrough
The prolific singer is said to have started singing at the age of 16. In 2018, he released his debut album known as Love. The project was made up of 12 songs that include; Love, Gimbiya, Aisha, Mama Na and Arewa Na among others. This project made him popular across the country.

In 2020, he released another album known as 'Jita' which was critically acclaimed. The album contained songs such as Dan Almajiri, Fatima and Maryam which were well received by fans in Hausa and Nigeria in general. In October 2020, he released another album known as 'Call On Me'. Upon its release, Ali Jita said: "With this new album, I prepared for it for a long time, and I was happy with the songs and the production. I felt that I proved myself with the Love album, and with this new album, I just want to share some of my music. And that was always my feeling and my intentions." Call On Me contained 7 tracks such as Nagode, Hustle and Rawa among others.

In 2022, the Northern Nigerian singer released Tambura which is also a smash hit in the Hausa region.

How to listen and download music on Mdundo.com
His music is available for free download and streaming on mdundo.com. To listen to his songs, visit mdundo.com and search for Ali Jita. A catalog of all his available MP3 music will then be provided for you to select the songs you want. You can download/listen to the latest hits on Mdundo through your phone, laptop or any other device that can access the internet.

Why choose mdundo.com?
Mdundo offers the latest MP3 music for free streaming and download. All you need is a feature phone and you can start listening to some of the best tracks from your top artists. Additionally, you can also enjoy DJ mixes specially curated to meet your needs. The hits are also easy to download and do not need a lot of data since they have been customized for users with feature phones.