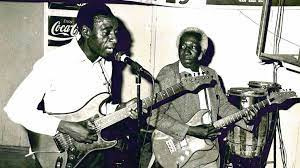 John Amutabi Nzenze-born in 1940 in Muthurwa, Nairobi- was a musician from Kenya. He performed the twist dance style that became a legendary symbol to his name throughout his career. Some of his most popular songs are "Angelike" released in 1961, "Julieta Rudi Tuone" and "Habari za Nairobi (Nairobi twist)".

He is from the Luhya tribe in the western region part of Kenya, Nzenze went to St Peter's primary school and he started playing with his father's guitar at the age of 12, but after learning how much time he spent playing it, his father sold the guitar.

After finishing school, he worked at the Norfolk Hotel in Nairobi. At the time he teamed up with Daudi Kabaka, with whom he recorded three songs "Masista", "Bachelor Boy" and "Nyumba za Tobacco". These songs were released by Jambo Records and became hits.

Through his music, he was able to tour Japan, Britain and various East African countries. In 1968 he represented Kenya at the All African Music Festival in Algeria, finishing third.

As a result, president Jomo Kenyatta feted him and his Air Fiesta Matata band, and Emperor Haile Selassie invited him to perform in Ethiopia. In the next year, the band performed with Miles Davis in Germany, who was impressed and arranged for the band to tour America.

In 1971, BBC World Service gave them the Best Band in Africa award. However, Nzenze left his group in 1972, after which he went to perform regularly to tourists at the Panafric Hotel and later played on tourist ships. As of 2009, he performed at the Westlife Club in Kakamega and was still making music. He also served as a board member of the Music Copyright Society of Kenya.

In 2009 he was among four pioneering Kenyan showbiz people given Head of State Commendation awards by president Mwai Kibaki. Others were John Katana (band leader Them Mushrooms), David Ndung'u and Conrad Karukenya (aka Tiger Power).

After having a successful music career Mzee John Nzenze passed on on May 20th, 2020 at the age of 80.

For his tremendous success in the music scene get to download and stream his music here on Mdundo.com