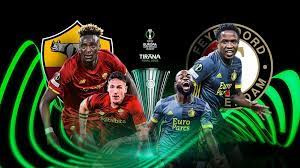 To bring a memorable first edition of the Europa Conference League to a close, Roma and Feyenoord lock horns on Wednesday evening as they battle for a place in history.

While Roma is seeking their first victory in a UEFA final, Feyenoord could become the first side to lift all three of Europe's club trophies.

Roma has already secured a place in next season's Europa League as they defeated Torino last Friday 3-0.

Roma manager Jose Mourinho will also be relishing the chance of becoming the first manager to win all three of Europe's club competitions.

Feyenoord booked their place in the final after an intriguing semi-final tussle with Marseille, and are now aiming to complete four wins from as many European finals.

Nicolo Zaniolo is available for selection having recovered from a muscular injury. Henrik Mkhitaryan is unavailable due to a hamstring injury while Feyenoord goalie Justin Bijlow remains out due to a long term injury that has sidelined him since March.