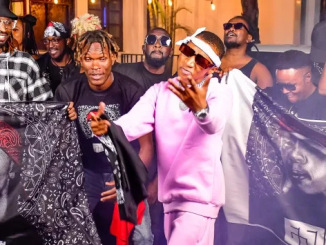 ‘Bandana ya Esir’ is a tribute song to late Kenyan rapper E-sir who died during a road accident along the Nairobi-Nakuru highway in March, 2003.

E-sir was signed under Ogopa records and was widely known for his hits that include; Leo ni Leo, Bamba, Boomba Train, Mos Mos, Maisha and Hamnitishi among others.

In addition to the hits, E-sir was also known for always having a bandana, which is what Nelly and the crew are celebrating.