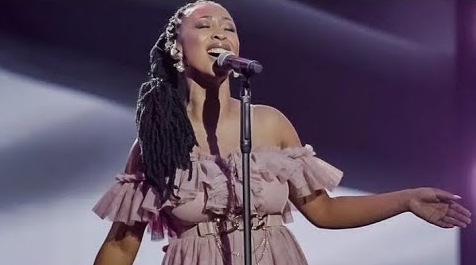 Singer Nqobie carved her music passion between 2010 and 2013 as a backup artiste. She loved what she was doing and by 2013, she had a bigger vision of her music career other than just being a backup artist for the famous Nothende among others.

Nearly eight years later, she disappeared leaving her pool of fans asking what became of her dreams in music. However, she is back in the game and is hopeful of a sterling comeback.

She is among SA Idols season 17 top 10 optimists. The 28-year-old Soweto-born singer temporarily left her music career for a banking job but the desire was always in her.

She recently narrated to Sowetan Live how it all started in church and grew to a strong passion that she is willing to pursue to the end with SA Idols new season.

“My music journey started in church like many. When I was 15, it became formal when I was allowed in the big choir [and] because I’m tall, it didn’t look odd and they also liked that I have a big voice,”Nqobie narrates.

She never forgets how Nothende picked her up and nurtured her passion. Unknown to many people, she did not only stop her singing because she landed a job as an administrator at a local bank, but also because she was not doing well mentally.

She battled depression at the time and it was fuelled by lack of money and concerts.

“After matric, I sent Nothende a short music clip on social media and I started working with her as a backup vocalist. I stopped because I wasn’t OK mentally. I was diagnosed with depression and around that time, I realised music wasn’t working based on the money and lack of gigs,” she said.

With her banking job, she felt better but the urge to do music nagged her a lot. She felt hollow without it. And when SA Idols announced its 17th season, her sister encouraged her to be a part of it and is among the top 10 hopefuls.

Already, she is a favourite for the judges but, it has its own pressure too. “There is a lot of pressure in being called the early favourite and it means I must maintain the momentum until the end. It means I must push myself harder and not disappoint those rooting for me and myself,” she added.