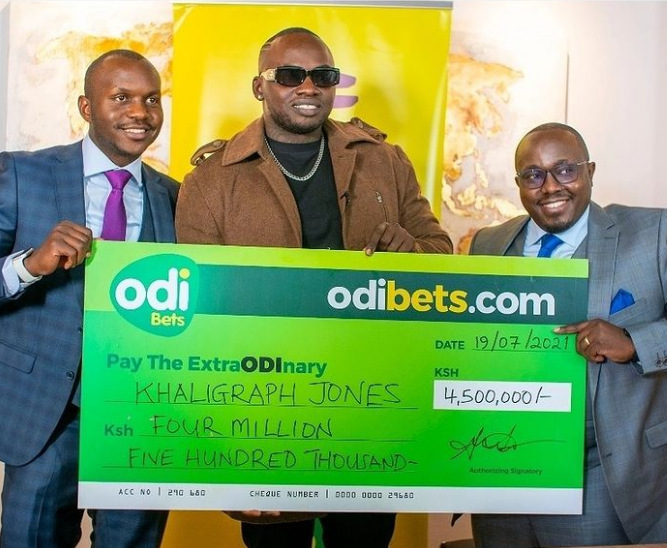 Celebrated Kenyan artist Khaligraph Jones has bagged a Sh4.5 million deal from OdiBets for his new music elevation initiative. Taking to Instagram to announce the great news, Khaligraph dubbed the deal as a big win for Kenyan Hip-hop as he expressed pleasure in having Odibets on board in his new journey.

“Attention Attention, A big Win for KE Hip Hop. Following my initiative of Elevating our music Industry, am pleased to announce that @odibetskenya has joined this noble cause and has topped up my initial contribution of Ksh 500,000 by adding a whooping Ksh 4,500,000 to that end. Further details of how you can get to be part of the competition will be announced tomorrow... God Is Good,” he captioned.

Expounding on the impact of the new developments, Khaligraph explained to his fans that he had to go back to the drawing board after his initial announcement yesterday that the online competition would begin yesterday (19th July 2021).

“Trust The Process, Make KE Hip Hop great again. Back to The Drawing board and Make this Competition Bigger and Better. We begin Tomorrow. Big shout To @odibetskenya for Coming through for KE Hip Hop,” he added.

This great development follows Khaligraph’s recent declaration that he would sign three new artists under his label Blu Ink Corp, in the coming days, as well as part with half a million from his own pocket for new music elevation initiative which was supposed to start yesterday (19th Monday 2021).

His new music elevation initiative which pushes the hashtag ‘Heshimu Kipaji’ or ‘Respect Talent’ in English, is in a bid to bring respect to the entertainment industry following the recent row between Dr. Ezekiel Mutua and Eric Omondi.