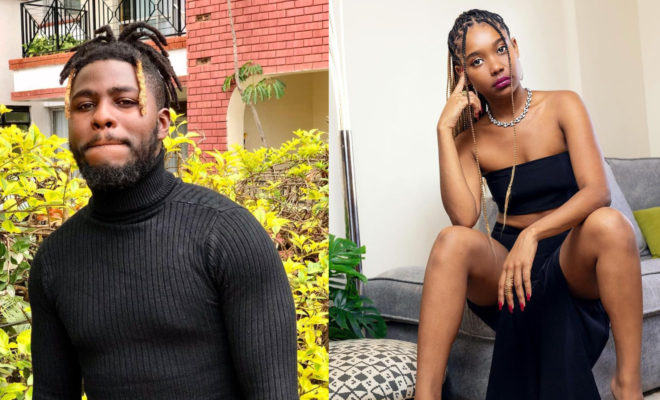 In the statement, Sol Generation noted that they have taken note of the claims made and are investigating to establish the correct position, before taking necessary action.

"As Sol Generation, we do not and will not tolerate any form of mental, physical, and emotional abuse. The recent events and allegations surrounding Nviiri The Story Teller and Elodie are of great concern to us. Over the last 48 hours, we have been working frantically to understand and investigate these events. The sensitivity of this matter should not be understated, and as such we have been treating this matter with the utmost privacy and humanity,” part of their statement read.

Sol Generation also informed the public that it had prepared a specialist to have life and mental health sessions with both Nviiri and Elodie once they get back to the city.

“As both parties arrive back into the city, we have life and mental wellness sessions waiting for them, with a specialist on the field. We believe offering a helping hand in these times is paramount,” Sol Generation said. 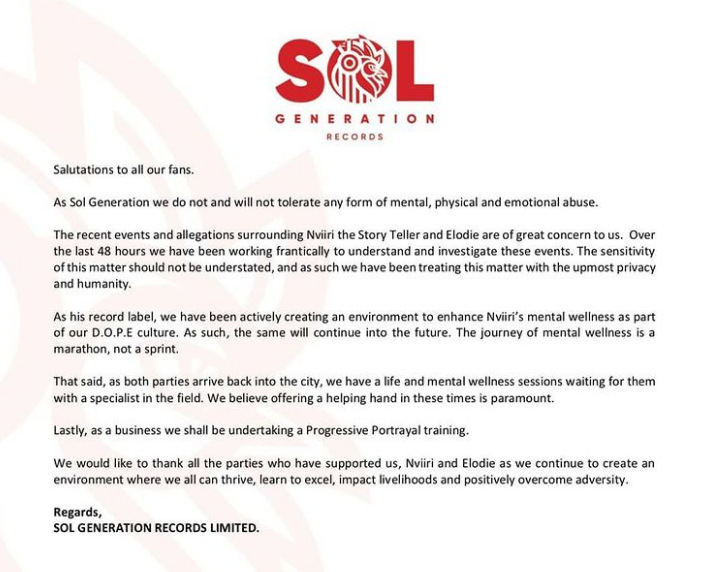 The statement comes a few hours after Elodie took to her Insta stories to explain the saga, blaming it on fueled tension and an afternoon of a few too many drinks.

“Nviiri and I came to coast with our friends to unwind, relax, and make peace with each other. When I made my post it was fueled by tension and an afternoon of a few too many drinks,” she wrote.

She also blamed blogging sites and bloggers for spreading misinformation which according to her has been affecting their careers and family life.

“Neither one of us thought it would be blown out of proportion the way it has been. Blogging sites and bloggers have also begun to spread misinformation and this is affecting our careers and family lives,” she added. 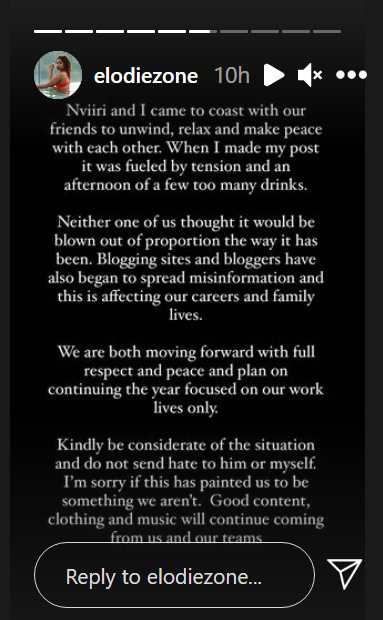 In response to all these allegations, Nviiri posted one Insta story, confirming that he was okay, and also thanked everyone who had reached out to him.

“For everyone asking Niko Sawa. Thank you for reaching out,” he wrote.

Initially, Elodie Zone had accused Nviiri of physical, emotional, and mental abuse in grotesque details that left both of their names trending on various social media platforms.