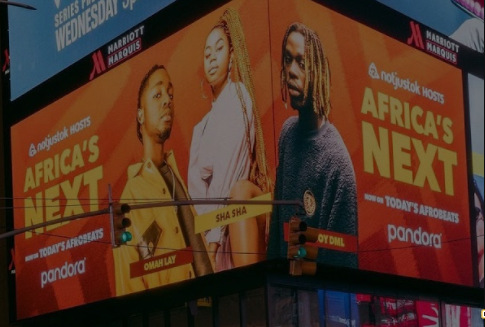 Amapiano Queen Sha Sha is over the moon after she was featured in New York’s Times Square on Monday.

Taking to her Instagram, she shared the news with her fans excitedly. “Mutare to the streets of New York! Super Excited to be a part of Africa’s Next Mode on Today's Afrobeats hosted by @notjustok listen on Pandora Music,” she wrote.

The New York Times Square is a major entertainment and commercial center in downtown Manhattan.

Different artistes and businesses are showcased daily at the Square’s Wall-to-wall mega screen.

Meanwhile, Sha Sha is currently in high spirits after her viral hit ‘Tender Love’ was nominated for the prestigious S-MA 27 awards.

She has been nominated in two categories; Record of The Year and Best Video of The Year.

She announced the nomination on her social media pages and urged fans to support her, arguing that she is nothing without them.

“Remembering a year ago and everything that happened I just want to take the time to thank all my fans who take their time to listen to my music. Here’s to another nomination,” she told her fans.

‘Tender Love’ is a mind-blowing collabo and currently has over six million streams on YouTube.