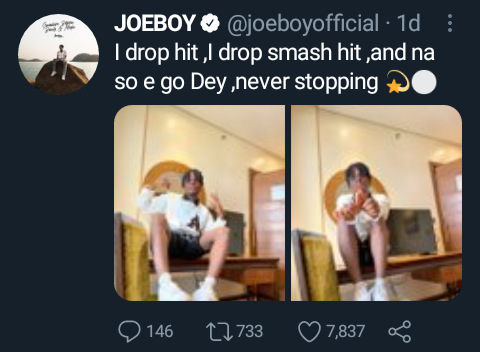 Nigerian singer and songwriter Joeboy had subtly declared himself as the king of making not just hits, but also smash hits.

In a recent post on his official Twitter handle, the 23-year old singer noted that he has no plans at stopping dropping hit songs.

Joeboy, who Mr Eazi of emPawa Africa record label discovered in 2017 has gained prominence in the recent years, and now ranks among the most popular young Nigerian artists.

Some of the most recent hit singles that Joeboy has released is 'Focus' off his debut album 'Somewhere Between Beauty and Magic' released in February 2021.

Joeboy's single 'Baby' was released on March 1, 2019. It garnered 20 million streams across YouTube and Spotify in 2019.

The visualizer music video for 'Baby' to date has over 45 million views on YouTube.

In 'Beginning', Joeboy finds himself developing feelings for a friend whose advances he had initially dismissed.

Joeboy's popularity has been on the rise thanks to his romantic songs that fuses R&B and Afrobeats.

The Lagos State-born singer declared himself as the African Pop Star when he released the 'SBBM' album.