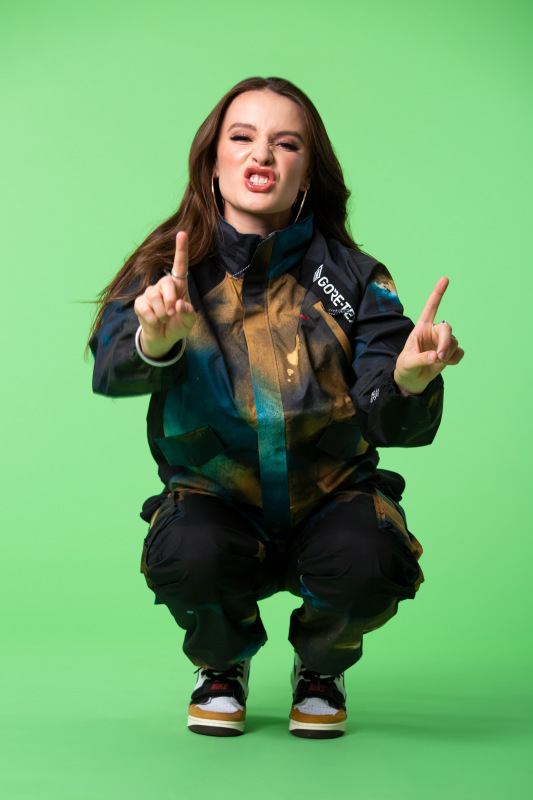 London’s newest hip hop sensation Olivia Swann is dishing out some home truths in ‘Two Faces’, a shimmering springtime bop that is sure to ruffle some feathers,

With hints of electro-pop and R&B, the track is a fun poke at the way the industry can often orchestrate women artists, and how Olivia refuses to back
down to conformity. “Two Faces is a song about that person who talks the big talk but who is fake with their small talk, telling you all the things you want to hear but as soon as your back is turned, they say the complete
opposite.

It’s a common story in the industry of someone trying to mould and completely shape somebody to fit into a box, so someone had to say it! I’m definitely not that artist who is attracted by how much somebody can
brag and name drop, it doesn’t work with me.

Especially, if you’re trying to give me a makeover into a
‘pop-star’...”.
Produced by Will Patterson, ‘Two Faces’ is her sophomore release, following her rollicking debut ‘Salty’, which was championed by 1Xtra’s DJ Target, BBC Radio 1’s Jack Saunders and Apple Music’s Rebecca
Judd, as well as racking up over 30,000 streams on Spotify alone.

The single reached the viral TikTok shores, as social media influencer Kristen Hancher created a dance to it that was shared to her 24 million
followers on the platform. The Berklee College of Music graduate has a distinct style that reflects her music,
using streetwear and trainers as opposed to heels and dresses to express herself. “I am an eternal tomboy”
Olivia explains. “Handbags and heels just aren’t my thing. I would constantly get mistaken for a boy as my go
to look was baggy jeans, beanies, football shirts and of course trainers at all times!”, and her defiance to
adhere to the industry’s expectations is what makes her so compelling as an artist.
Counting her inspirations as Outkast, Erykah Badu, Chet Baker and Amy Winehouse, Olivia’s aesthetic is
brimming with a wild variety of genres that has led her to her unique sound. Having been mentored by
Grammy award-winning producers and songwriters such as James Fauntleroy (Kendrick Lamar, Frank
Ocean) and Rance Dopson (Roddy Rich, Ella Mai), Olivia has perfected her artistry over the years, and
emerged one of the most exciting newcomers on the scene.
‘Two Faces’ is a fantastically tongue-in-cheek offering from the singer-songwriter, and 2021 looks set to be Olivia Swann’s year.