EXCLUSIVE: Kayvo Kforce Explains Why It Takes Two To Tango

Emotion is one human aspect very hard to paint on canvass or in sound. Reason why, as much as many musicians attempt the fete, only a few manage to reach out to the tender mental state, that is emotion. Even harder, is collaborating on such a sensitive idea. Kenyan Kibera rapper Kayvo Kforce, lets us know what it took to share the studio with fellow rapper Eli Skecth in their new 'She Don't' single:

“Eli, is a friend of mine and we go quite a while back. As a result, when the idea to this song came up we happen to have been together hence the song itself. Apart from that, Eli is a good rapper so I felt he would do good to the song”

The song being quite variant from all of Kayvo’s previous songs, the video would be something to look forward to- right? “Yes we are actually planning to do the video as soon as Eli Sketch breaks from school. He is currently a student at Moi University, so once he comes to town we should be able to give visuals to the song” added the rapper

Kayvo Kforce also spoke on the inspiration in an earlier interview, which might have answered the hip hop enigma of whether gangsters cry. READ MORE HERE>> http://mdundo.com/news/2993 and get the free song ‘She Don’t’ below 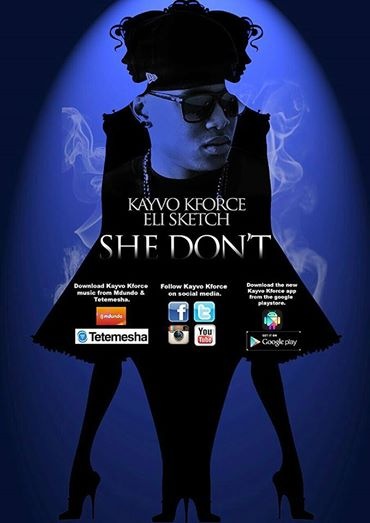