Taking to social media to announce their split Nelly the Goon, Benzema, Dmore, and Kardozar, posted a detailed caption that provided clarity to their fans as to why they decided to break the group.

Highlighting the main reason for their split, the caption expounded that all members of the group had developed different goals and objectives and also added that this was a mutual decision among all the members.

“We have reached a point we have different goals and targets. So the decision of us splitting is a mutual feeling and we saw that as the best way forward. Again, Thank you so much for the support!!! We shall meet again. God bless you all,” the final part of the caption read. 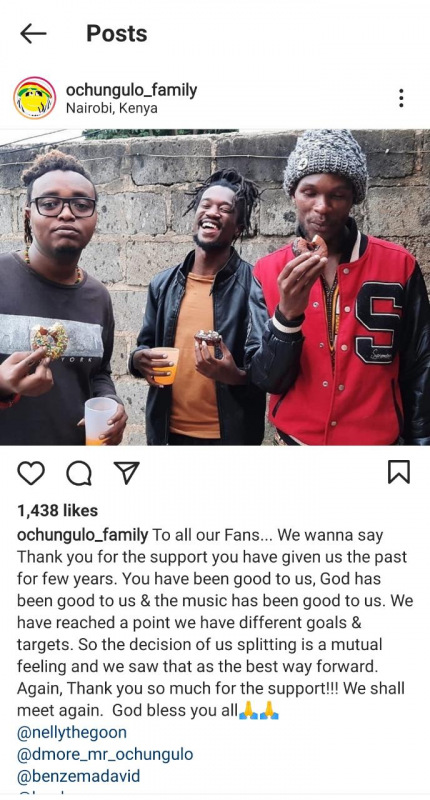 The group had blessed their fans with hits like ‘Pandemik’, ‘Kaa Na Mama Yako’ and ‘Wanjiko’ which will be missed by their fans.

The group also deleted most of their music which had garnered millions of views from their official YouTube account.

Reacting to the announcement, fans wished them well in their future endeavors. One Instagram user commented, “It was good while it lasted u guys really dropped bangers, best of luck.”

Meanwhile, Nelly the Goon recently featured in a jam dubbed ‘Clowning Hii Nairobi’ by Hitman Kaht and K4 Kanali. The hit which dropped two weeks ago has been receiving lots of love from fans and currently has over 26,000 views on YouTube.