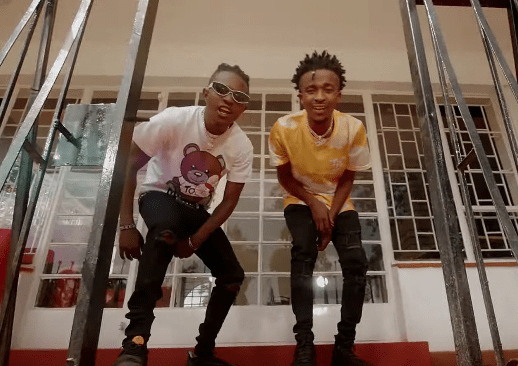 ‘Nipiganiange’ is a jam that asks God to fight for them when they undergo hardships in life. The first scene is set in a church, with a youth pastor preaching to the youth.

After the powerful sermon, he invites Mr. Seed and members of the choir Sailors to bless the church with a song.

Miracle Baby and Mr. Seed open the song thanking God for his love, provision of food, and shelter. In the chorus, they all ask God to mold them when they do wrong, to correct them when they make mistakes, to shut them up when they lie, and to fight for them when they are mistreated.

Mr. Seed also sings that he loves God for all He has done for him. Miracle Baby on the other hand poses a question in the song asking, “Who said that Gengetone artists cannot preach the gospel to the masses?”

The rest of the members of Sailors also deliver their verses in a unique way creating a versatile gospel song. ‘Nipiganiange’ was produced by Alexis on the Beat, Starborn Empire Studios, and Giddy Vybz with Wapendwa Mziki providing the Background vocals.

On the other hand Slim Mapoz and Reels, 360 directed the visuals. ‘Nipiganiange’ has been received well by fans. The song already has over 180,000 YouTube views in a short amount of time.