Omah Lay Says 'It Feels Strange to Be Famous' for Him 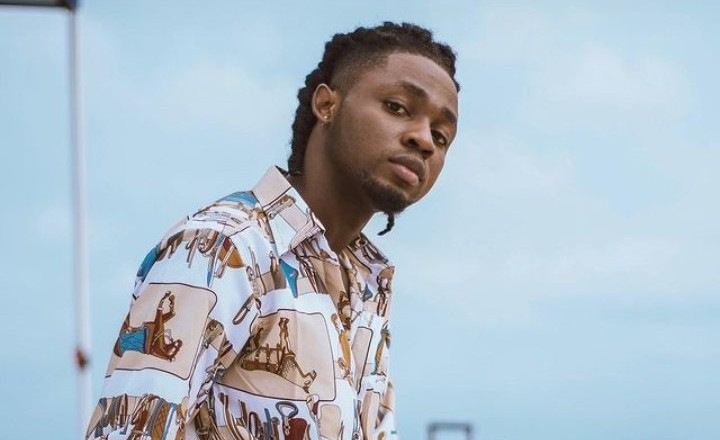 Nigerian singer, songwriter and record producer Omah Lay has had to make a quick change on his lifestyle within a very short period of time.

At the start of 2020, Omah Lay was hardly a known name amongst Nigerians, but 10 months down the line, his songs are all over the heads of not only Nigerians but across the continent and globally.

With his growing profile in the music industry, Omah Lay who rose to prominence with the release of 'You' single and his debut EP 'Get Layd' says being famous 'feels strange' for him.

This was a response to a Twitter user who had asked him what it feels like to be famous.

"Still feels strange... dunno what I’ll do when COVID is over and no more excuse to wear mask," he noted during a question and answer session on the social media platform. 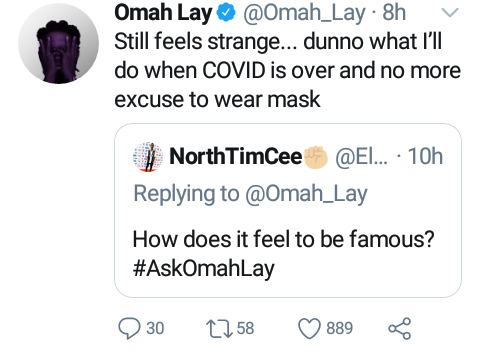 Another user asked whether Omah Lay who was born in Port Harcourt and grew up in Marine Base would wish to go back to his old days when he would freely go to the mall without a concern of attracting attention, and he replied:

On the question of gaining popularity within a very short time, the 'Bad Influence' grooner noted that it was hard to explain the feeling. 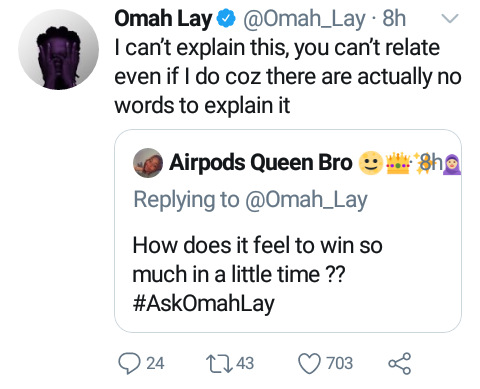 He also revealed that his hit single 'Bad Influence' was a song inspired by a lot of things among them heart break.

Aside from 'Get Layd' being the most-streamed EP by a Nigerian artist in 2020, 'Bad Influence' has also been rated among the most streamed songs in Naija on a number of digital platforms.

Omah Lay recently released his second EP 'What Have We Done' in which he ponders on his new fame and fortunate in the singles: 'Can't Relate' and 'Godly' as well as revealing his inner secrets on 'Confession'.

The 5-track EP also hosts 'Damn Remix', a duet with 6Lack, with all the tracks crystalizing the thoughts of a maturing artist on the rise.

what have we done