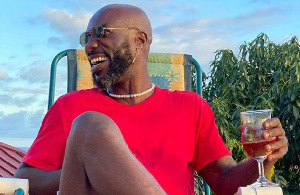 George Kwabena Adu popularly known by his professional name as Kwabena Kwabena is trending on different social media platforms after his picture with blue painted toe nails going viral.
The picture going viral on media displays the Highlife musician Kwabena Kwabena dressed in a red t-shirt and shorts with his feet crossed and his neatly trimmed beard partly looking grey in colour. He also had his sunglasses on which matched with his earring and a white necklace with a touch of blue hangs around his neck with his left hand holding a wine glass sitting in an unknown place.
“Now he fixes his nails too? ,” a follower asks with another puzzled fan questioning “What’s the meaning of the nails? I can't think far”.
Despite the fact that fashion evolves as time goes by, people cannot keep calm on Kwabena Kwabena’s new look. The Highlife musician is now being referred to as a Sister Kwabena Kwabena while other people have chosen to call him Abena, the feminine version of Kwabena. Though painting of nails is not new in the west as several high-life profiles male celebrities have done so. Some of them include; Asap Rocky, Harry Styles, Pete Davidson and Asap Ferg.