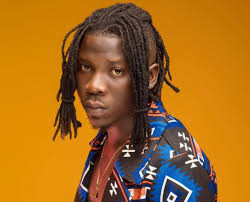 Dance hall artiste, Livingstone Etse Satekla popularly known by his stage name as Stonebwoy Burniton has appealed to Ghanaian government to consider the fee reduction of $150 covid-19 test for all passengers arriving at the Katoka Interntional Airport.
This compulsory fee for the passengers was put into force on Tuesday September 1 after the reopening of the airport which had closed down for almost six months. This PCR tests fee consideration of $150 has been disturbing to many people.
The Ghanaian government had defended the act by arguing that the fee is on the average unlike the other countries running the same tests at airports.
According to multiple award-winning dancehall artiste, Stonebwoy notes that December is around the corner and many people would like to travel back to their homes. He also goes ahead speaking on the behalf of the ordinary Ghanaian saying that they may find it hard to pay the fee mentioned by the government
Stonebwoy also questioned why those who return to Ghana and have had a negative results are made to test again at the airport since a certificate given by the Ghanaian government does not require any tests at arrivals in any other country. “It’s only Ghana that’s doing this to its people or all the other African countries have united in making it tuff (sic) for their people…” he wondered.