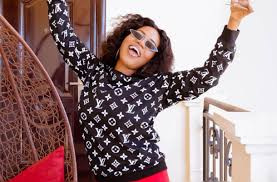 Ghanaian songstress Belinda Nana Ekua Amoah popularly known by her stage name as Mzbel has waded into ongoing discussions regarding the song by title ‘Happy Day’ by Sarkodie and Kuami Eugene, by asking Kuami Egene, whether Sarkodie forced him to do the song at gun point.
The song ‘Happy Day’ is the latest hit that has been surrounded by controversies which according to Kuami Eugene, he was neither aware of nor ready to do the political song. On the song ‘Happy Day’ song, Sarkodie sang a verse that is political which suggests his endorsement for president Nana Akufo-Addo who is eying to be re-elected in the upcoming elections.

Kuami Eugene has come out to deny knowing some lyrics of the song were political and that were campaigning for the president though many people don’t believe him. Kuami Eugene expressed his disappointment in rapper Sarkodie and complained that the song would negatively affect his brand.

In an interview on Neat FM, Mzbel said Kuami Eugene should not give an impression that Sarkodie deceived him. According to Mzbel, even if Kuami Eugene did the song because he had an option of turning down the music video after he found out about the political lyrics.
‘’Right now, it is not the Label that is talking. It is Kuami Eugene that is talking. So, if he can talk now, he could have spoken then . . . If they were giving him a drug and he didn’t like it, would he say the Record Label says so and so he will take it . . . So, it means you knew about it and yet you joined it. Because if you say you found out on the day of the video shoot, you could have opted out.

They can’t force you to take a drug to kill yourself because you’ve signed with them. So, if you saw how the video shoot went and you kept mute for us to finish the video shoot, you can’t talk now. You can’t say that Sarkodie deceived you,’’ she told the host.

“Did Sarkodie point a gun at your head to do the song?” she questioned the musician.