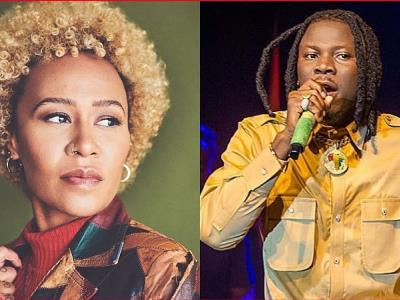 After doing a single with Kerry Hilson, Ghanaian dancehall superstar, Stonebwoy has once again been featured on Emeli Sande's new single.

Emeli Sandé who confirmed the news through a Twitter post, added that she was excited about the collaboration.

The video of the song titled “More Of You” will be premiered on Wednesday, October 21, 2020. It was produced by songwriter Nana Rogues.

"I’m so excited to finally be releasing “More Of You” with @stonebwoyb
and @NanaRogues
as my next single! It will be released Wednesday with video at 8pm. Can’t wait!
Pre-save the track and RSVP to the video premiere: https://linktr.ee/emelisande," Emeli Snade tweeted.

The news of their collaboration didn't come as a surprise as she had earlier commended the works of Stonebwoy through her post.

Following the release of Stonebwoys 'Anloga Junction' album in 2019, Emeli Sandé in an Instagram post wrote that the album uplifted her spirit and urged her followers to go check it out and support the artiste.