There is No Beef Between Diamond and Alikiba, Nandy Claims 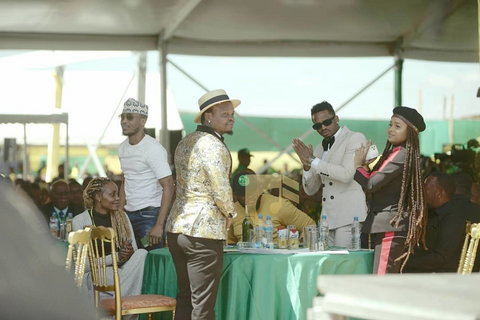 Tanzanian singer Nandy has shared her views on the alleged beef between bongo heavyweights Alikiba and Diamond Platnumz.

Nandy’s sentiments come at a time when President John Magufuli called on the two musicians to unite and put their differences aside.

The unification was done during a political rally where the two musicians shared a table alongside Nandy and Harmonize.

Speaking on Thursday, Nandy stated that she believes that the two musicians have had no bad blood before as alleged in the media.

According to Nandy, the beef is a creation of the media and fans and only aimed at increasing music sales.

Over recent years, there has been a perceived beef between the two musicians over who is the king of bongo music.

Nandy added that while sharing a table with Alikiba and Diamond in Dodoma, the two musicians shared light moments with no tension.

During the interview, Nandy hinted that she might seek a political seat in the next five years.