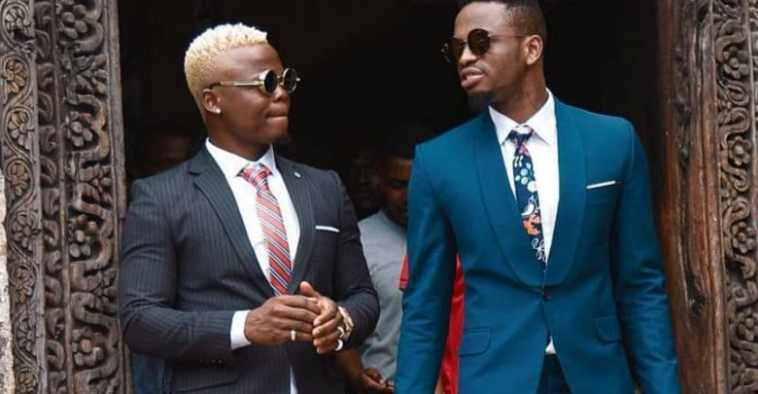 Harmonize’s hit song ‘Kwangaru’ featuring Diamond Platnumz will go down in history as one of the biggest songs in the Bongo industry.

The video has now been viewed over 65 million times on YouTube.The song was produced when Harmonize was still signed under Wasafi classic.

Although the video has attained massive success, it is worth mentioning that the two musicians once clashed during the shoot on aspects like costumes and who should be given prominence in certain sets.

According to a video showing what happened behind the scene of the shoot, Diamond can be seen explaining how Harmonize’s choice of costume might impact the video’s quality in the final product.

As a result, Diamond ends up featuring on several scenes that were meant for Harmonize.

In one set, the director stated that the two musicians should wear black clothes but Diamond chose blue attire and blocked Harmonize from the scene.

This decision did not go well Harmonize, who felt that Diamond was taking center stage yet he owned the song’s credit and Diamond had only been featured.

Diamond maintained that Harmonize’s attire was boring for the specific shoot. In the video, Harmonize is visibly angry and he can be seen arguing with Diamond.

Interestingly, Director Kenny sided with Diamond stating that the ‘Jeje’ singer had more experience and he knew the reasons behind his decisions.

At some point, Diamond mocks Harmonize for almost tearing up over the decision to lose his slot on the contentious slot.

Here is the video: https://www.youtube.com/watch?v=OKxh8yuDr0w