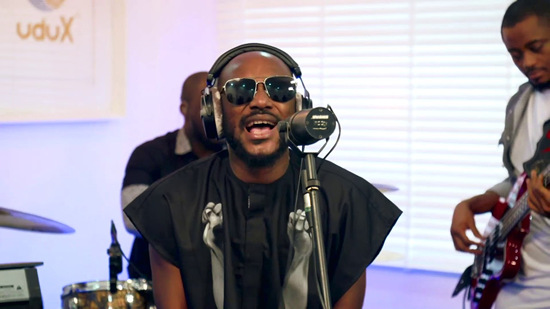 In a post on his social media pages on Tuesday, 2Baba said the appointment will deepen his commitment to supporting the effort of UNHCR personnel and volunteers.

He also hailed donors and supporters of the UNHCR activities.

“Honoured and humbled by my appointment as regional goodwill ambassador of UNHCR. Thanks for the recognition. This will no doubt deepen my commitment to supporting the effort of UNHCR personnel and volunteers who are on ground every day, working hard to provide support and hope to millions of forcefully displaced persons across the world,” read part of 2Baba’s post on Instagram and Twitter.

“Special thanks to donors and supporters of the cause. Blessings one and all,” he added.

UNHCR is a United N ations agency with the mandate to protect refugees, forcibly displaced communities and stateless people, and assist in their voluntary repatriation, local integration or resettlement to a third country. 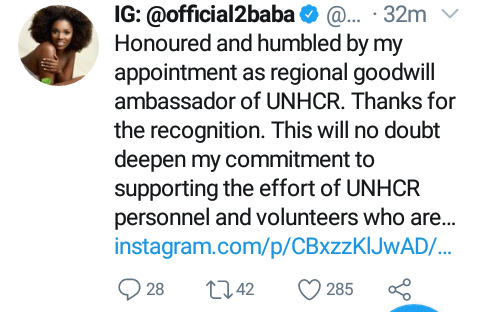 Born Innocent Ujah Idibia, 2Baba apart from being a singer is also a songwriter, record producer, and entrepreneur, philanthropist, humanitarian and activist. He has a Non Governmental Organization known as The 2Baba Foundation whose motto is ‘Service to humanity' formerly known as The 2Face Reachout Foundation.

2Baba has been involved in several humanitarian activities among them a partnership with UNHCR in 2017 where he made a donation of 11,000 US Dollars to the organization for IDs and returnees. He also released a song dedicated to IDP awareness titled ‘Hold My Hand’ with 60 per cent of proceeds from the song going to support IDP cause.

Prior to 2014, he was known as 2face Idibia before changing to the current stage name 2Baba.