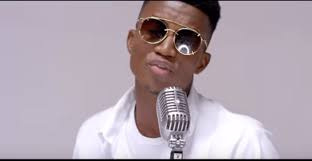 Kofi Kinaata gave the most outrageous response as to why he does not sing in English. He made this revelation during an interview on Okay FM, with Abeiku Santana when he was asked why he hasn’t produced any English song yet. According to him Michael Jackson never did a Fante song, hence he does not see any reason why does he should do an English song.

“Why should I bother myself singing in a language that is not mine? Did Michael Jackson ever sing in Fante? Over my dead body will I sing in English.” Kofi Kinaata responded.
Abeiku wondered if it’s because Kofi could not express himself well in the English language.

The award winning Ghanaian musician and songwriter is well known for his Fante rap and freestyle, hence being referred to as the ‘Fante Rap God’ (FRG). He has won several wards including the Hybrid of the year at the Ghana National Gospel Music Awards 2019, in February 2020.

The response of the Ghanaian singer/songwriter Kofi Kinaata has made him to receive a lot of plaudits online from his fans. Social media is giving him mad props for his answer – some are even saying he’s funnier than the so-called comedians in Ghana!