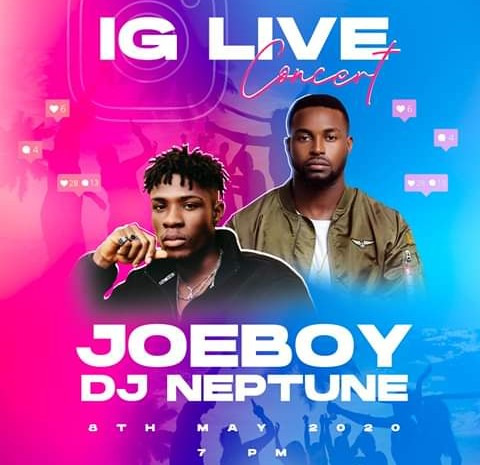 With the Coronavirus pandemic still limiting meetings in groups and people confirned indoors, it is in general public that we should not be expecting any public concert from our favorite musicians any time soon.

Despite that fact, the music industry has not been boring, at least thanks to social media.

One such concert will going down this Friday, May 8.

The concert that will be streamed live on all major social media pages will see fast-rising Nigerian singer Joeboy perform live alongside award-winning DJ Neptune.

In a post on his social media pages on Wednesday, Joeboy whose recently released song dubbed 'Call' is performing well said the concert will start from 7PM (West African Time).

Apart from a live performance, Joeboy said he will also be making live calls to some of his fans. 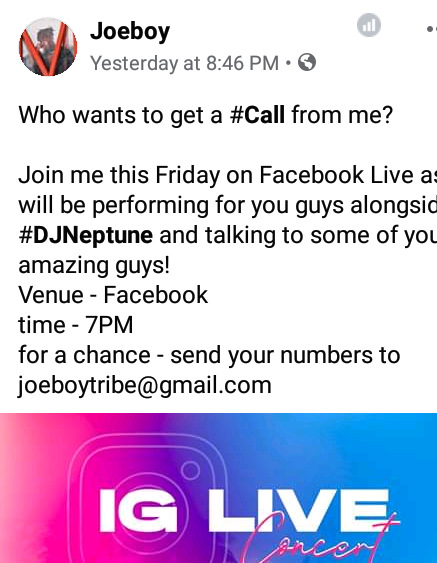 "Who wants to get a #Call from me? Join me this Friday on Facebook Live as I will be performing for you guys alongside #DJNeptune and talking to some of you amazing guys!
Venue - Facebook
time - 7PM
for a chance - send your numbers to joeboytribe@gmail.com," Joeboy posted on Facebook.

"Throwing down a live concert with #Greatness @deejayneptune. I'll also be going live and calling some of you amazing people.
Venue: Instagram/ Twitter/ FB/ YouTube live.
See flyer for handles" he added in a tweet on Wednesday. 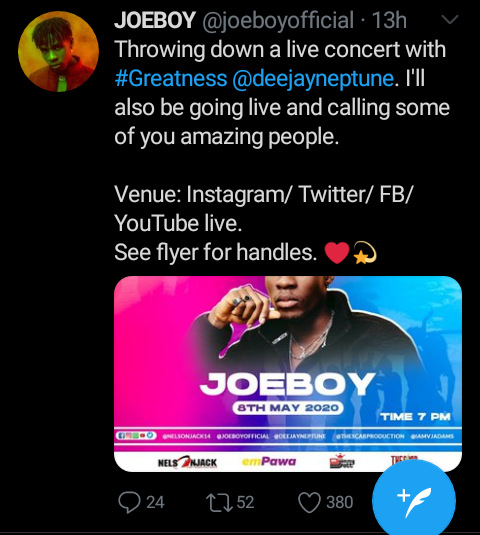 The live performance might not be as entertaining as when you're watching the performance live from a stadium but based on the current situation it is worth your time.

Some of the songs you should expect to be performed live is of cos the latest one 'Call', 'Don't Call Me Back', and 'Nobody' in which Joeboy joined forces with DJ Neptune and emPawa Foundation boss Mr Eazi.