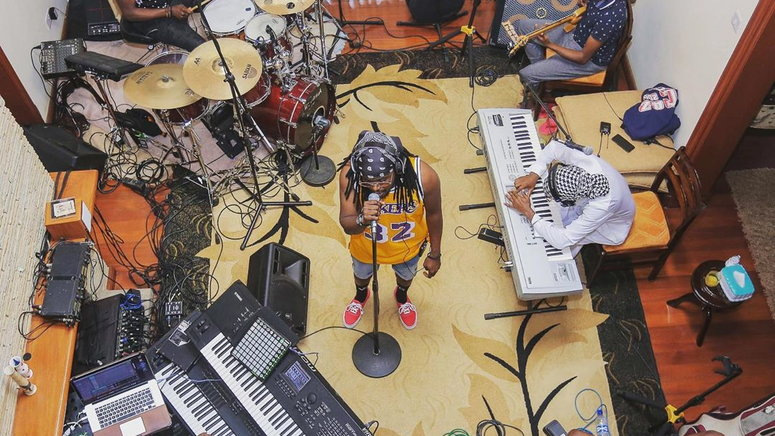 Award-winning Kenyan R&B and Hip-Hop Artiste Nyamari Ongegu aka Nyashinski is set to treat his fans to a live concert on April 8th, 2020 ahead of his much-anticipated Album dubbed ‘Lucky You’.

“This album will be a dedication to my fans all over the world, so I am inviting them to tune in to the live stream on my digital pages (Facebook, Instagram and YouTube) as we also do our part to stay #TogetherApart during this time”, said Nyashinski.

On Tuesday, the Free hit-maker put up a photo while in rehearsal session with his Band, assuring his fans that everything is set for his upcoming Live concert.

“Lucky You’ pre-release live performance ... Here on IG live! 08.04.20 9:30 p.m. (E.A.T) #luckyou. On Wednesday, 8th April, 2020 at 9.30pm (EAT) the Chief Chef Returns with a live performance that will be featuring some of the classics you know and love AND a preview of some of the music off the upcoming album #LuckyYou. We will be playing our part in ensuring that we all remain safe at home and stay #TogetherApart by bringing the music to you. Join the 4 Count Band and I, from the comfort of your living room, as we deliver these fresh jams LIVE via my digital pages; (YouTube & Facebook- Nyashinski and Instagram @realshinski). #ChiefChefReturns #luckyyou” shared Nyashinski.

The Lucky You Album

The ‘Lucky You’ album will be available on all digital platforms on the 17th of April 2020.

Fans can expect the album to be delivered in Nyashinski’s signature lyrical fashion which provides a peek into the Kenyan society by addressing various social issues whilst also displaying appreciation to them for their support.

A number of artistes across the world have been entertaining their fans on various streaming and social media platforms, by doing Live concerts basing on the fact that all public gatherings have been banned due to the widespread of COVID-19.

Just the other day, Sauti Sol also held an Instagram Live concert, performing and connecting with their fans around the world.